What I Knew as a Boy

The first thing I can remember is pulling a carrot from the earth. The bright orange, twisting root speckled with the dirt from our little backyard garden felt cool and foreign in my fingers. Our little house was smack in the middle of suburban Colorado Springs, which is a city that spills and rolls over the mountain foothills and out into the plains to the point that it really should be three or four different cities. We lived in the middle, in those houses that stare up at the snow-capped Pikes Peak because they can’t afford to live closer to the mountains they so identify with. There, in our little postage stamp of a backyard, right up against the wooden fence, we harvested from our garden the first food I can remember seeing, the first act I can remember doing.

Everything in those early years I took for granted, never questioning that things could have been any other way with our family. Of course Blaine and I shared a room and bunk beds. Every dad must read stories at bedtime with voices for all the different characters, but the best stories were the ones made up about the cowboy brothers who had to keep a watch out for cattle rustlers and find treasure in red-rocked canyons and of course they were us and were real.

Our backyard, our front yard, the bannister in the kitchen that we would drape a blanket over and do puppet shows for people sitting in the family room below—everywhere was vast and waiting to be filled with our imagination and adventures. We were Blue Angels on our bikes in the neighborhood. We were Green Berets stalking through the jungle and crawling over the hill in the yard that was really hardly a mound. There was something wrong with the neighbor who yelled at us for leaving skid marks with our bikes on the sidewalk; that was obviously what bikes and brakes and rear tires were for, just as Mom was for mercy when we slipped and tore up our knees on the asphalt.

The second thing I remember, and remember not in the sense of the photo-montage of people’s faces and family practices and the look of places like the poor quality of that knee-tearing asphalt, which was all full of small rocks, or how we were free to roam our street so long as we didn’t cross over into a different cul-de-sac and certainly not all the way over to Pemberton, but the second thing I knew, the way I knew that carrot as though it were the finger of God sparking my mind with life, was that I was a cowboy.

And probably so much more than that as well—I knew that I was meant to be the hero of some great story, and growing up in the high desert of central Colorado with the shadow of the mountains to cut our afternoons short, it was only too easy to imagine myself patrolling the wagon trains astride my trusty steed, six-shooter at my hip, duster all crusty from the last rainstorm, revolving carbine snugly in the holster behind my saddle. This was romance, epic, my true identity, and at once frustratingly impossible and eternally worth rehearsing. On days that we grew tired of chasing down outlaws, we invented other roles and other worlds, but each had something of the same longing and role about them. 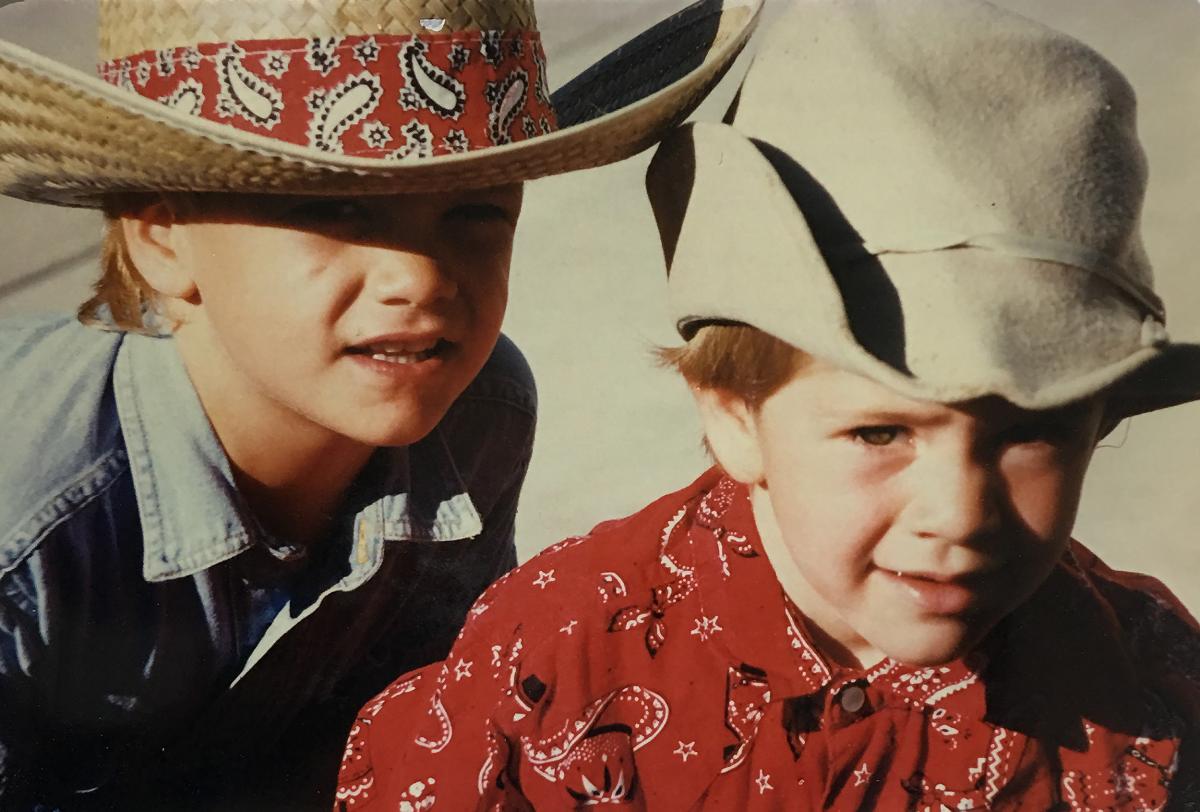 Of course I was the leader and Blaine was second-in-command, which left our orders to be followed by our brother Luke and Cody our neighbor, who arrived on our doorstep one day like a gift, pulled in a red wagon by his older brother who was scary and strong and huge and all because he was three or four years older than we were, but at least he liked our WWJD bracelets even if he called us the Potty Rangers.

He was wrong, though. We were Jedi, gladiators, cowboys with real hats and boots and fake six-shooters and matching neckerchiefs, and we got to go to the rodeo with our dad in the faded green Wagoneer and watch the other cowboys and wonder when they would recognize just who was sitting in the stands and invite us down to show everyone how it was really done.

We didn’t have a television, so far as I knew in those years, and what we did have was our imaginations and a chest with costumes and puppets, and that was all we needed. We would create worlds we knew were real and mattered, and the good guys always beat the bad guys.

I don’t remember making decisions then, or being particularly aware of the passing of time or seasons—not that I wasn’t—but the days felt so long, and all of a sudden Luke wasn’t going to be sleeping in the nursery anymore and the bunk bed had gotten a lot smaller. The mountains were places we went if we wanted to or not, like our trips to visit the grandparents out in California, and I’d be lying if I didn’t admit that the pool and the beach and Disneyland were the best part. We’d get muskets from Frontierland and blunderbusses from Critter Country and Dad would have to carry them all wrapped up through the airport so our games back home could be so much better for our new props.

Looking back, it seems like most of our interactions were around play. But then, those were the years before really entering the school system, so our days were long and our world was small, about the size of our house and backyard most days.

And really, play might be the wrong word. That word makes me think of hula hoops and foursquare and pogs; it makes me think of kids rolling around in the dirt laughing in conniptions in a sort of delusional hysteria. We were playing though, while we worked out just who we were and what reality was like. Nothing had been taken for granted about the world outside of our family. The bulls at the rodeo were massive and alien, the ants on the sidewalk were fascinating and precise in their little line, rock formations were surprising and meant to be climbed, the bedtime stories our father read or made up could never be predicted in their twists and turns and complexities.

We were building our world by examining the pillars of the earth which must be somewhere beneath the cracks in the sidewalk, and we were trying to understand our place in the story that was clearly going on, and surely our place in it must be dangerous and capable and probably best fulfilled while wearing a cowboy hat. We knew the world must be a fairy tale with bizarre creatures like giraffes and mule deer, with strange food like bright carrots and Gogurt, and with the pictures of faraway places like Easter Island and the pyramids. All that remained for us was to find our part in it all and to learn if we could handle what would come.

You might dismiss all this as a privileged First World childhood totally detached from reality. But in fact it was about as close to the best preparation any boy can have for reality. Because reality is epic and dangerous, and we need to know we were made for it.

The (Value) Laden Body up Five Agreements that are Killing Millennials