What to do When You Find Yourself Hating Your Life

Even though we had been walking for some time without a solid sense of direction, it wasn’t until we came upon our own tracks in the snow that I knew we were screwed.

Four friends were elk hunting one late October several years ago, somewhere in the Sawatch range of Colorado. A heavy snow had fallen the night before, and we thought it was ideal conditions for finding elk—all we needed to do was lock onto some fresh tracks and follow them down to our quarry. But after wandering for two hours around the crown of a mountain, we came upon human prints, not wapiti tracks. We just stood there for a long, confused moment, looking at relatively fresh boot tracks in the snow. The brain turns very slowly in these moments: Where the hell did these come from? Oh man—are there other hunters up here this morning? These guys are after our elk! But wait—we know we are the only people up here because there was no other car at the trailhead. Oh, man—those are our tracks.

It’s a strange feeling to be confronted with undeniable evidence that you are not where you thought you were—that, in fact, you have no idea where you are. A queasy disequilibrium begins to overtake you—sort of like losing your balance standing still—when you realize that no, you have not been walking with purpose these past several hours after all. You’ve been walking in circles. And no, you have no idea where you are now, because a snowy forest looks the same in every direction.

Something in my head fought the idea that we were, if not totally lost, pretty much totally disoriented and mostly lost. Still standing there, looking at the tracks going off both directions, my mind protested: This doesn’t happen to me. This can’t have happened to me. I refused to accept it; I wanted to lunge off down the mountain to prove that no, I hadn’t screwed up this badly. 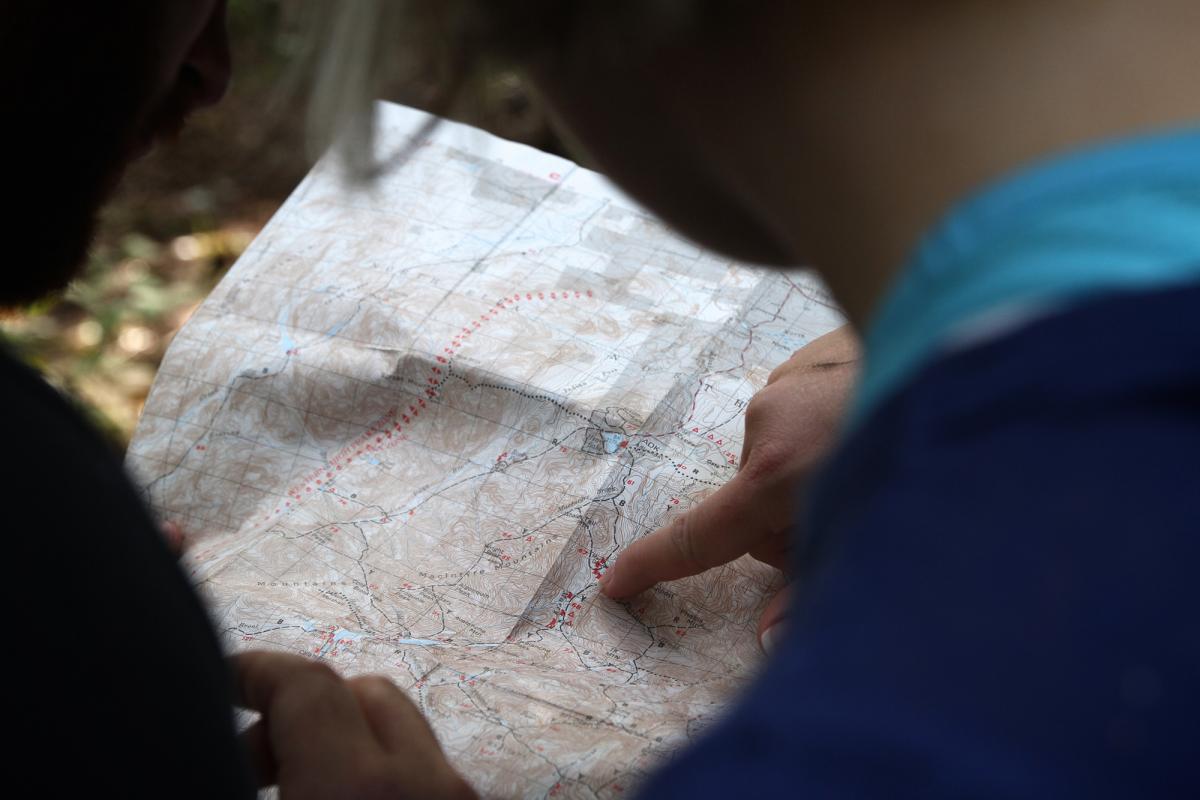 But I’d read enough outdoor survival stuff to know that the one thing you do not do when you realize you are lost is keep going. You stop. You don’t move. You settle down. You stop for three reasons: First, so you don’t make matters worse by getting yourself even more lost. Second, so you can calm down both mentally and emotionally and possibly get your bearings. And if you cannot determine where you are, by stopping, you increase the possibility that someone can find you. A moving target is much harder to locate in the wilderness. But man, that stopping part takes humility.

We stopped, the four of us, and just stood there for a while, marveling at the fact that we had committed the classic hunter blunder. This is the stuff that makes Outdoor Life. We stood there—four yokels just milling around in the snow wearing blaze orange. Somebody cracked a joke about how we looked like four dudes headed to a school crossing guard convention (who else wears bright orange vests?). We laughed, and the laughter was the best thing that could have happened. Because we lightened up. Our heads began to clear a bit, and we talked about where we might be and how to find some sort of sure bearing on our location.

Now, this isn’t going to be a hunting story, not even a wilderness story. This is about that awful place we all come to at some point when we realize we have lost our way—we don’t like our life, we don’t like where we’re headed, we don’t know what to do with our story to make it a good story. So let’s stop and get our bearings and talk about what you do from here.

First, let’s get rid of the guilt; it only adds to the sinking feeling that you will never find your way when you feel you have screwed up by losing your way. Let me lift that guilt, if I can, by telling you one of those truths you won’t find in any of those “Find the life you want!” books: Nobody gets The Plan. I know you think they do, surely somebody does, but it just isn’t true. Nobody gets The Plan. God just doesn’t give anyone the Master Plan for their life, not even for the next five years. You really have to come to terms with this so you can take hold of what is given:

You get a conversation.

Your Father is far, far more committed to that conversation than he is to giving you The Plan for your life.

And that is the kindest thing in the world. I can honestly say now that looking back over the 30 years since I was 26, I am so profoundly grateful God did not tell me everything that was going to go down. It would have been overwhelming; I wouldn’t have been able to take the next step or the one after that. What he gave me was the next step, each step of the way. What you get is a conversation; what is offered is simply the next step.

What am I supposed to do with my life? is a question so filled with pressures, fears, and honestly a generous dose of anger, we couldn’t hear an answer even if one was being offered. The far better question is, What do you want me to do next? That question works for the same reason the old proverb says the only way to eat an elephant is one bite at a time.

However, you may not even get the next step right away, because often God is after something even more critical: what is going on in your heart. When you find yourself lost or disoriented, hating your life or just massively discontented, it flushes deeper things in the heart. Stuff begins to surface, like all those feelings of abandonment or fear or self-hatred; all that I suck at this, or Life sucks. And that stuff is gold. Because it opens you up to deeper healing, deeper freedom; it opens a door for transformation and restoration. It prepares the way for you to become a more whole-hearted human being, and a more whole-hearted human being is in a better place to know what to do with their life, how to get there and how to handle it when they do get there. 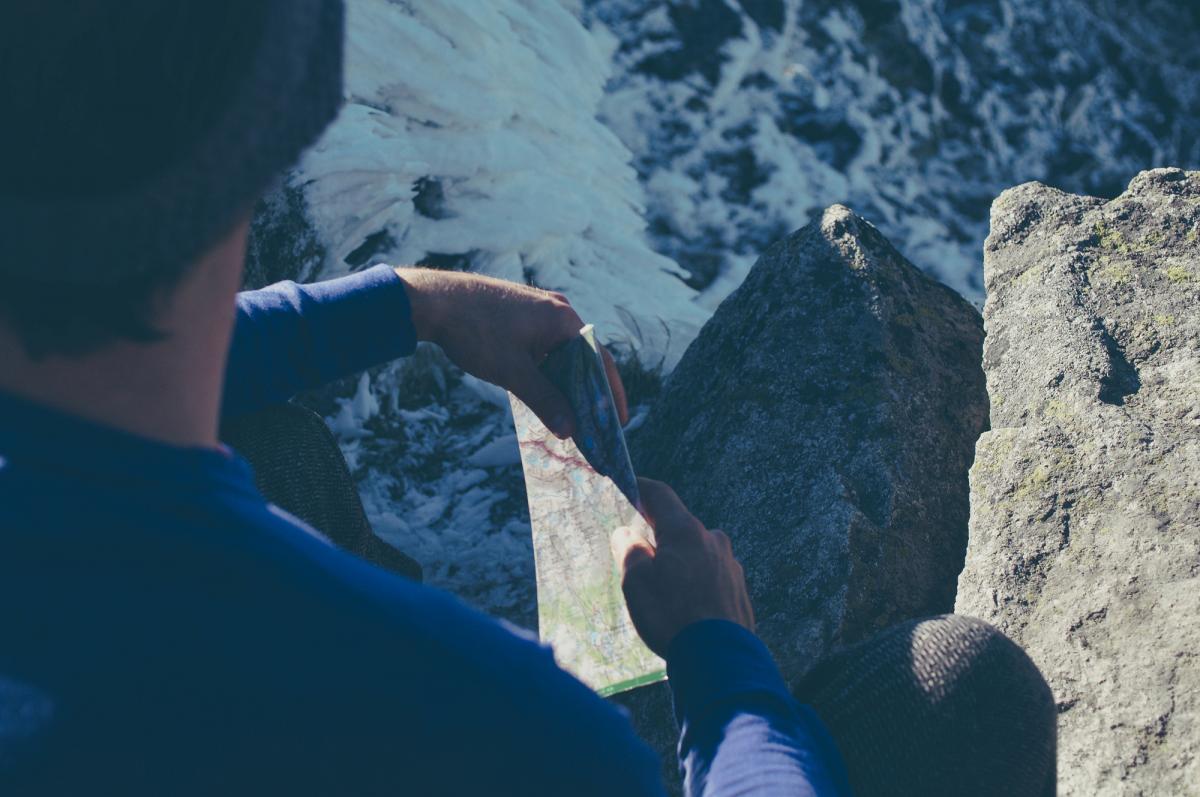 All the fear, rage, shame, and confusion debris that floats to the surface when we find ourselves lost in our own life is gold, for the simple reason that that stuff is down in there anyways, and ignoring it does not make it go away. It lives in your soul like poisoned groundwater, and it slowly saps you of life. That’s why God wants the two of you to deal with it, and that’s why he often does not answer the first question, What am I supposed to do? (It is, in fact, often why he allows us to get lost in the first place.)

Sometimes he answers the “what next?” question; lots of times he does. But when you find those sorts of answers are not coming, switch the question. This is big, so stay with me—when God is not answering the question you’ve been asking, ask a new question. Something along the lines of, What do you want to speak to in me? What are you trying to raise in me? I’ll bet dollars to doughnuts he’s trying to raise something in you, so stay with that question for a bit. Give it a few days, a few weeks, even a few months. God is not in the hurry we usually are. Keep asking that question, and then pay attention—notice what begins to surface. What are you feeling? Anger? (Why does life have to be so f-ing hard?) Young? (You feel 10 years old inside.) Abandoned? (Some version of pressure, fear, loneliness—you feel on your own to figure your life out.) That’s gold, my friends, pure gold.

Notice what sort of self-talk is going on. All that inner dialogue (which often turns to audible rants), all that stuff we say to ourselves, is really revealing:

I’ve blown it; I missed my chance. Now I’m screwed.

I’ll never get it together.

Why bother? I should just…(What—take that job, quit school, give up on your dreams?)

Open the door, and Jesus will meet you in your fear, anger, shame, all your lost-ness. Once he gets access to those places, he can do his healing thing.

Then you are in a far better place to get back to asking for the next step. Not The Plan—just the next thing he has for you. I know that feels small and inconsequential, but the next thing is going to get you to the next-next thing, which gets you to the next thing after that, and the combination of those steps gets you out of the woods and into the place God has for you. As we practice this approach, we develop the one skill that will determine the outcome of our life more than any other: we learn to walk with God.

We made it out of the woods that day because we stopped. We settled down. We began to think it through. We prayed, and realized that what we’d done was circumnavigate the top of a mountain—one vast circle—and therefore somewhere along the ring of our tracks was another set of tracks entering that ring and pointing the direction back to the truck. It helped immensely to have someone else to talk to about our lost-ness. (I’m offering a picture of what you can do with your lost-ness, your exile.)

Discontent can be a great force, my friends. Your miseries are your ally; they urge you on. If you handle them well, they will see you home.

Recovering the Story All Around Us up Snowed In: Winter Essentials (or the lack thereof)