I used to write the way I imagine Hemingway doing it, with strong coffee cooling nearby, and an open window, so that the loud pageant of the world could come pouring in. It was slow writing, pushing together uncounted hours like time was the raw material of the discipline.

No longer. Now, I write on a cell phone, taking walks, with a baby carrier strapped to my chest. Inside, and usually asleep, there is an infant. She is my daughter.

Earlier this year, she came into the world, in our living room, just after 4:00 in the morning. Of that experience, I have too much to say to try and fit it here, but it’s worth mentioning that if you’ve seen a woman give birth, misogyny will be very difficult to understand, except as a reaction stemming from bare fear over a confrontation with the deepest expression of dýnami a human probably embodies. I’m telling you. You see your wife in startling austerity, and the imago dei is there, standing the way recovered sculptures stand at archeological sites or the way mountains stand after windstorms have whipped the snow away. It is dramatic. 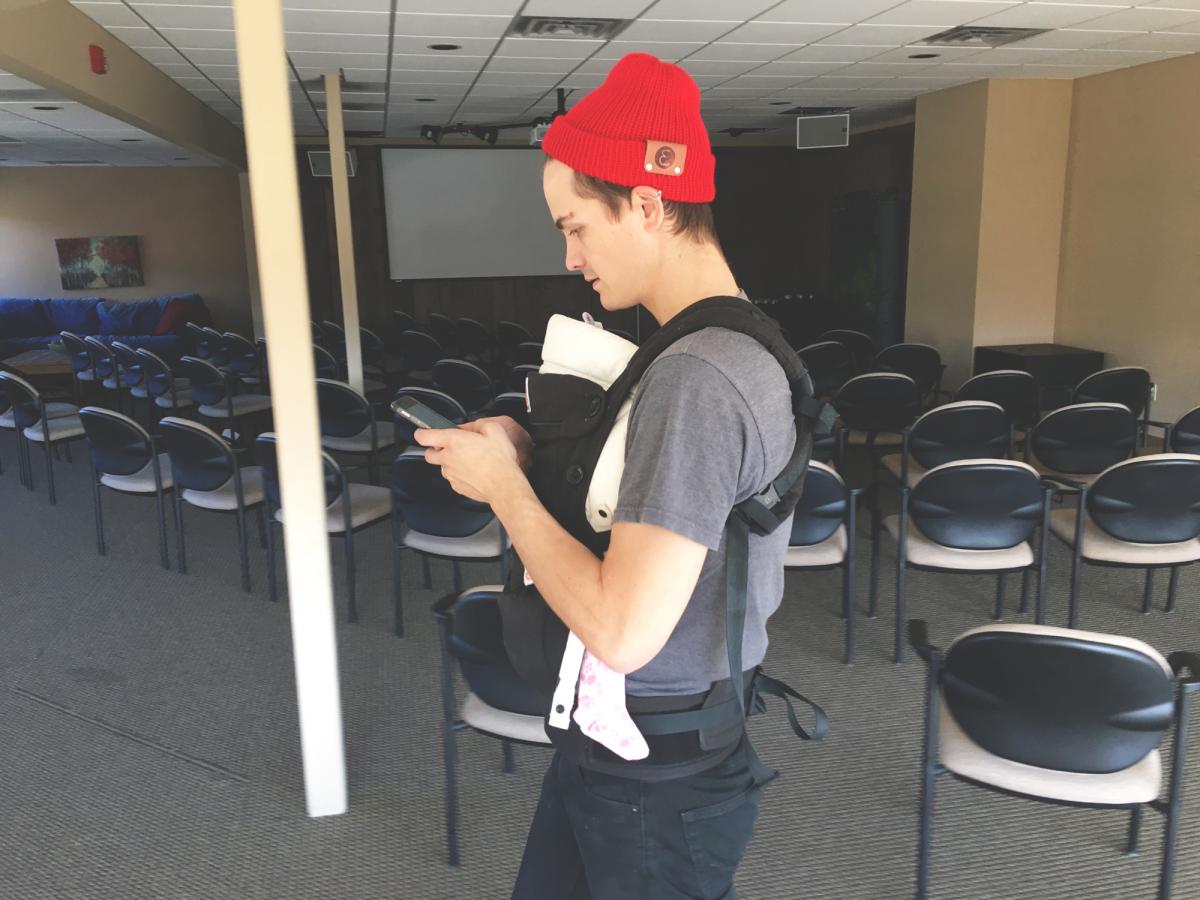 Anyway, it happened. I became a dad. When you do, all the fathers in your life will conspire to tell you that you will never sleep again, which is sort of true but hardly relevant. Telling a new dad that he’ll never sleep again is like telling visitors to the Grand Canyon that it’s pretty deep. It is, but “deep” hardly describes the overwhelming enormity of the experience—history lies there, its many centuries flattened to tissue paper by the unimaginable weight of intervening epochs. The experience is so deeply disruptive and difficult to talk about that we limit our conversation to the quantifiable parts. It’s deep. What we don’t say is that we saw more of the world than we’d ever seen before, and it changed us.

Becoming a dad is like that. The true qualities of the experience are ancient and mysterious and difficult to quantify, but the material part is a little less so, so we talk about sleeplessness. Still, if I were to take a stab at the indescribable part, I would say it like this: you feel your soul solidify. It does not harden; it becomes wide and firm. It transforms into the bedrock on which your child will build her life for a little while. It isn’t a comfortable experience—until that moment, my life felt more agile, like glowing sparks flung from the crackling edge of the fire. The experience of being a dad is deeper and slower and older. It’s not surprising to me that some people sort of panic when it starts to happen to them. It isn’t easy, but it is wonderful.

Beyond that, I’ve learned two things so far.

The first is that being a dad is both an identity and a role, and that while the identity comes in an instant, the role is learned over time. I thought I would learn it by doing it, and that’s definitely true, but it’s also true that you learn it through intimacy with God. It is, in fact, sustained by intimacy with God. That fact is very inconvenient, actually, given the demands on my time, but I’ve learned pretty quickly that being a dad requires more time set aside, not less. You act as a father because it is a consequence the Father is having on you. I think that’s true of all the roles we’re called to—we become ourselves by deepening our union with Jesus—but it’s especially true about fathering. There is, at least, less wiggle room. You can’t really pretend to be sustained by Jesus, night after night, if you aren’t.

As an aside, it’s almost too obvious to say, but all fathers are sons first. In fact, I’m increasingly convinced that fathering is actually just sonship, seen with authority. I haven’t totally figured it out, of course, but there is something true and mysterious to the fact that my role as a father is really an extension of my role as a son, and if I cannot keep living as a son of the Father, the life source of my role is cut off.

The second thing is that the love between a husband and a wife is the climate that sustains a child. They are entrusted into it, and they rely on it, like oxygen. And while there are many more demands on our time, I’ve needed to fight to find still more time to be with Em, as lovers in a marriage, not less. 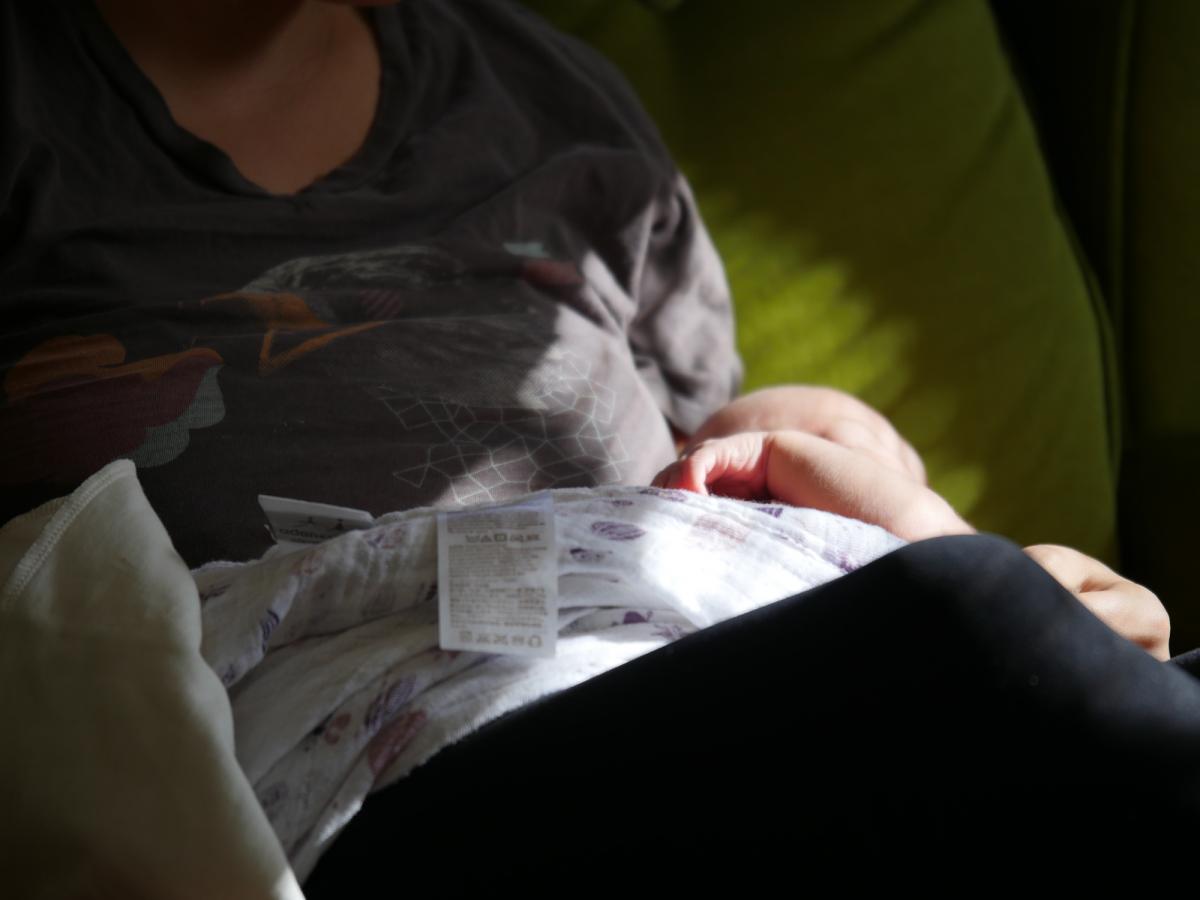 In the first few weeks, you operate like tag-teaming luchadores. You are teammates, tossing one another burp cloths and swapping wet wipes the way big wall climbers swap gear trading pitches. It’s an incredible experience, but it can’t be like that all the time. Em and I are not coworkers in the jobsite of our family. We are lovers, and caring for a family is something lovers can do. Now, I know that for many people, this isn’t the experience, and I would add that in our every role, we reflect an image of which Jesus is the original. There are no roles he cannot fill and no broken places he cannot restore. But if you do happen to be a dad in a marriage, one of the best things you can do is fight for your relationship with your wife. You’re going for joy, not just détente. We go out for milkshakes. We stay up late, instead of sleeping, to play cards and laugh and talk about our days. There isn’t really time for lingering dinners, but we are fighting for time where we can get it.

It isn’t easy, but it is wonderful.

Sometimes, I hold my daughter at night and have one of the most palpable experiences of eternity I’ve ever had. It is clear, somehow, that all of history might as well have been for her. She is the visible element of an invisible lineage, but I feel like behind me, you can see my father, and behind him, a grandfather, and on and on, an unbroken line of men stretching back through the gates of Eden, and no angel with a flaming sword could turn it.

Sometimes, she sleeps in my arms. I have never experienced any more undeserved, unreserved trust. Her simplicity disarms me. It startles me, like catching a whiff of the world before it fell.

Other times, she is awake. If you are creative, she will wait until you are on the cusp of a breakthrough and then need you desperately. She protests her father’s independence as though recognizing Adam’s sin.

Other times, I get home from what I have considered a trying day to remember that it was leisurely and that Em has spent her day carrying an infant in deadening arms; and then, if I had aspirations, I get to watch them die, one at a time, like doomed French aristocrats. I saw my friends less when I became engaged, and I see my pastimes hardly at all as a young dad.

But in the whole experience, some truly startling questions are manifesting themselves. Like, what would have to be true of God to set such an unproductive, slow, risky calling at the center of the universe? What would have to be true of his heart to trust men to be fathers, to allow them to either display or distort his very soul, and in so doing, become more like him, to walk out an identity he has maintained from bottomless infinity?

Like, who do I want to be, and what am I actually willing to do to become that person? I thought I was capable of sacrifice before. Do I want to be a dad badly enough to learn it now?

What Does "Masculinity" Mean? up Recovering the Story All Around Us