How to be an Ultrarunner

Lying in the bushes, unable to move, I listened to the sound of fellow racers pass me, one after another. I was disappointed and sad, but mostly I just wanted to vomit. Hidden slightly off the trail behind a stand of young aspen trees, I lay there, hoping to not be seen. I couldn't stand 20 runners each asking me if I was okay in a voice sympathetic but also excited to be passing someone. Minutes after lying down, I realized I may not be able to get up. Then the SOS button on my emergency tracker began calling my name. “Push the button and this will all be over.”

In middle school I was the ambitious kid who desperately wanted to be good at something. Tall and skinny, I gave short track distances a go, but when everyone else was crossing the finish line, I was only halfway through the race. As runners celebrated on the other side of the field, I wanted nothing more than to find an early exit from the track. The awkwardness of my family wondering how I’d taken a wrong turn on the track kept me going to the end.

Thinking longer distances might be my thing, I laced up my shoes for the cross country team but dropped before ever toeing the starting line of a race. The end of a five-kilometer run is a lonely place to be by yourself. With those experiences under my belt, I shelved my aspirations of being a runner until, at 37 years old, I decided ultrarunning would be my thing. 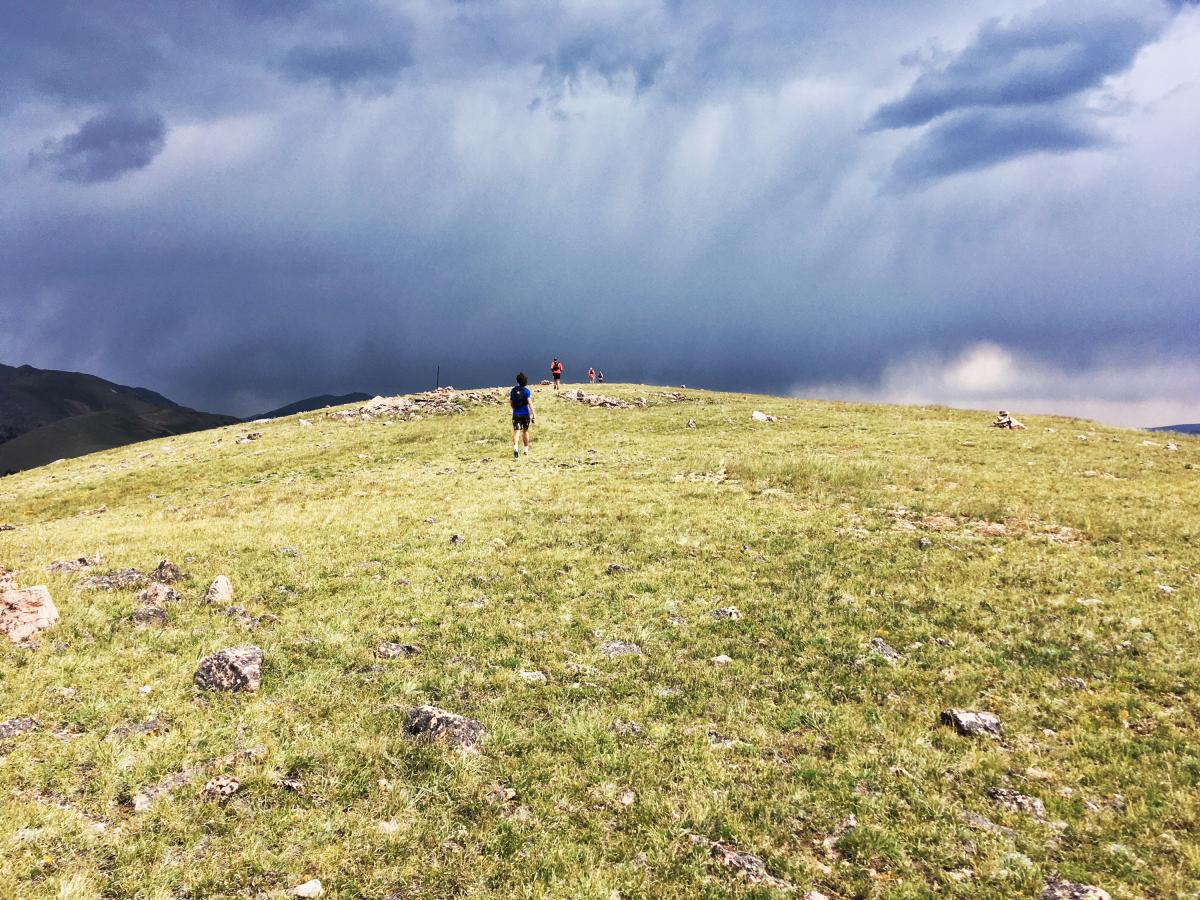 You’re probably thinking that taking up long distance running at such an advanced age sounds crazy, and I agree. Until then I’d hated running, but a would-be mentor helped change my outlook. Over the course of a few months, he and a few others convinced me that ultrarunning on trails is like fast hiking and it would be much easier than I thought. I could bomb down hills, cruise the flats, and—get this—walk the uphills!

On a cool day, I ran my first mile. Then I ran two. It was a snowy May in Colorado, so I ran on a treadmill, determined to enjoy running, but I can’t say I smiled much. The thought of walking up hills was appealing, but my young-at-heart self wanted to run like the wind. It was fun to start fast, but I tired quickly and ended many runs by walking back to the car. My first lesson: Take it slow and steady. The children’s book with the tortoise and the hare has a legitimate message.

As my training progressed, my friend Dave invited me into an ultrarunning adventure. He would be racing 100 miles through Utah and Idaho, starting early in the morning and ending sometime the next day. I jumped at the chance to crew him during the day and then pace his final 40 miles through the night. That’s when the doubt and fear crept in. I had never run more than 16 miles, I had never run through the night, I didn’t know how to crew, and I was afraid Dave would soon find my pace too slow and he’d just leave me behind. Who could blame him? 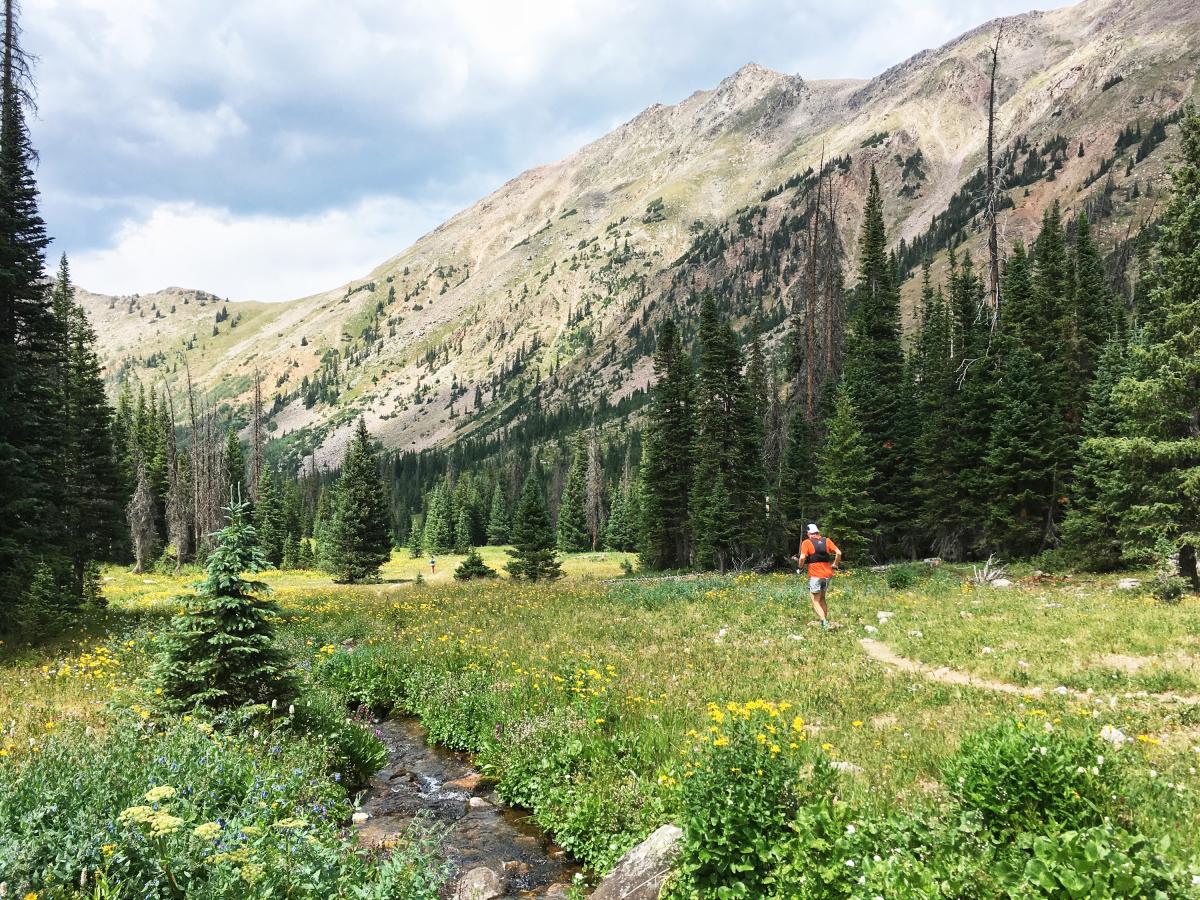 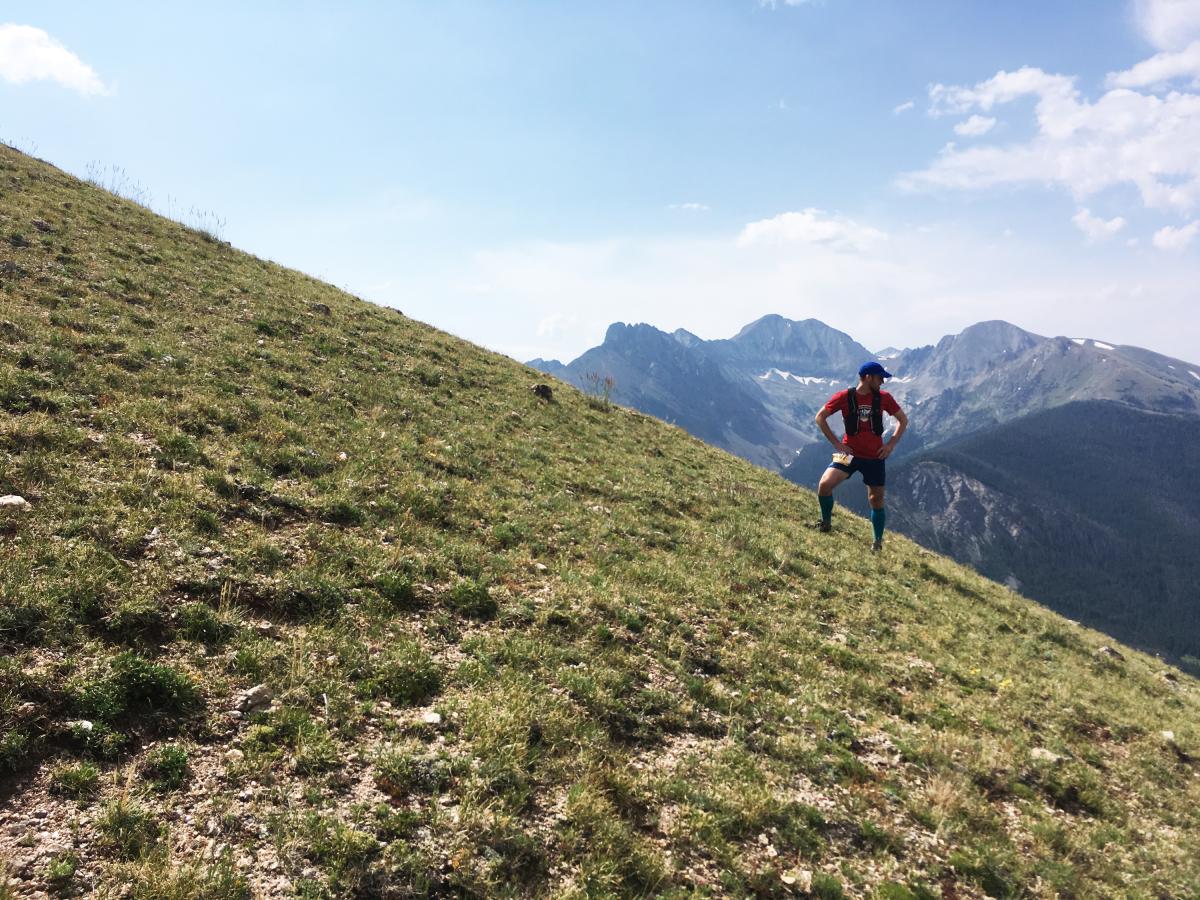 Thinking back to my middle school days on the track, I remembered all those kids finishing way before me. My second ultrarunning lesson: It’s not about the finishing time, it’s about starting the adventure.

Through mentors like Dave, I began to learn that ultrarunning is a sport built for middle-aged men and women. The young me wanted to go fast and quickly burned out in the first few miles. The middle-aged me knew to slow down and set a pace for the long run. Alone with my thoughts, I began to see parallels between long-distance running and my life.

On a 30-mile training run last year, I ran on the flanks of Pikes Peak to the summit and back. The going was slow as I approached 14,000 feet, but I kept going. It wasn’t fast, but I kept moving.

During Dave’s race, we slogged through frozen mud somewhere in Idaho at 3 a.m. My hands were cold because I had given my gloves to Dave, who seemed to need them more. It was too cold to stop, so we kept moving until the sun rose through a rainy sky, and we finished late in the morning. 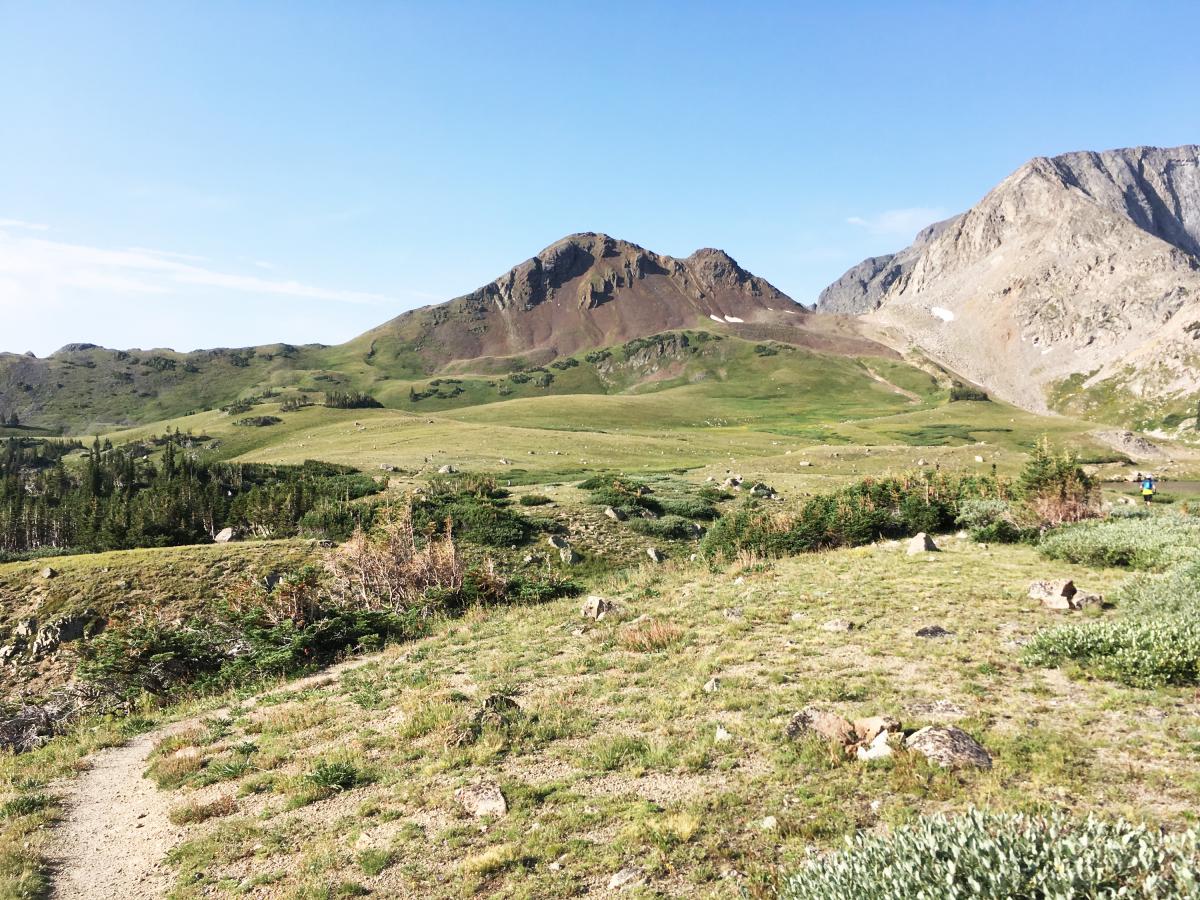 On Colorado’s Front Range this summer, I explored a new trail and ended up bushwhacking during a 30-mile training run. I’m now convinced it’s called bushwhacking because of the constant bushes that whacked me in the face. When I recounted my adventure to my wife, she said she would have cried. I also wanted to cry during that run, but since it wouldn’t have done any good, I kept going.

Now, lying in the bushes at mile 44 with only a handful of miles left in my race, I turned to God, not to give me strength, but rather, direction. Do I push the SOS button and wait for search and rescue to arrive and carry me to town, or do I somehow push forward? His answer: I want to run this race with you. I’d first heard that phrase six months earlier when I asked if I should run this particular race. He had been there all along, telling me slow and steady and keep going.

Ultrarunning has also taught me to rely more on others, which is not my normal. The long distances make me aware that I need others, from aid station volunteers and medical staff to my friends and family who selflessly give their time during long weekends to my success. And then there’s God, who wants to father me through running. Rarely does a long run go by where I don’t feel his Spirit urging me to keep going, a smile on his face as we finish together, hours after the leaders have already finished their first or second beers. 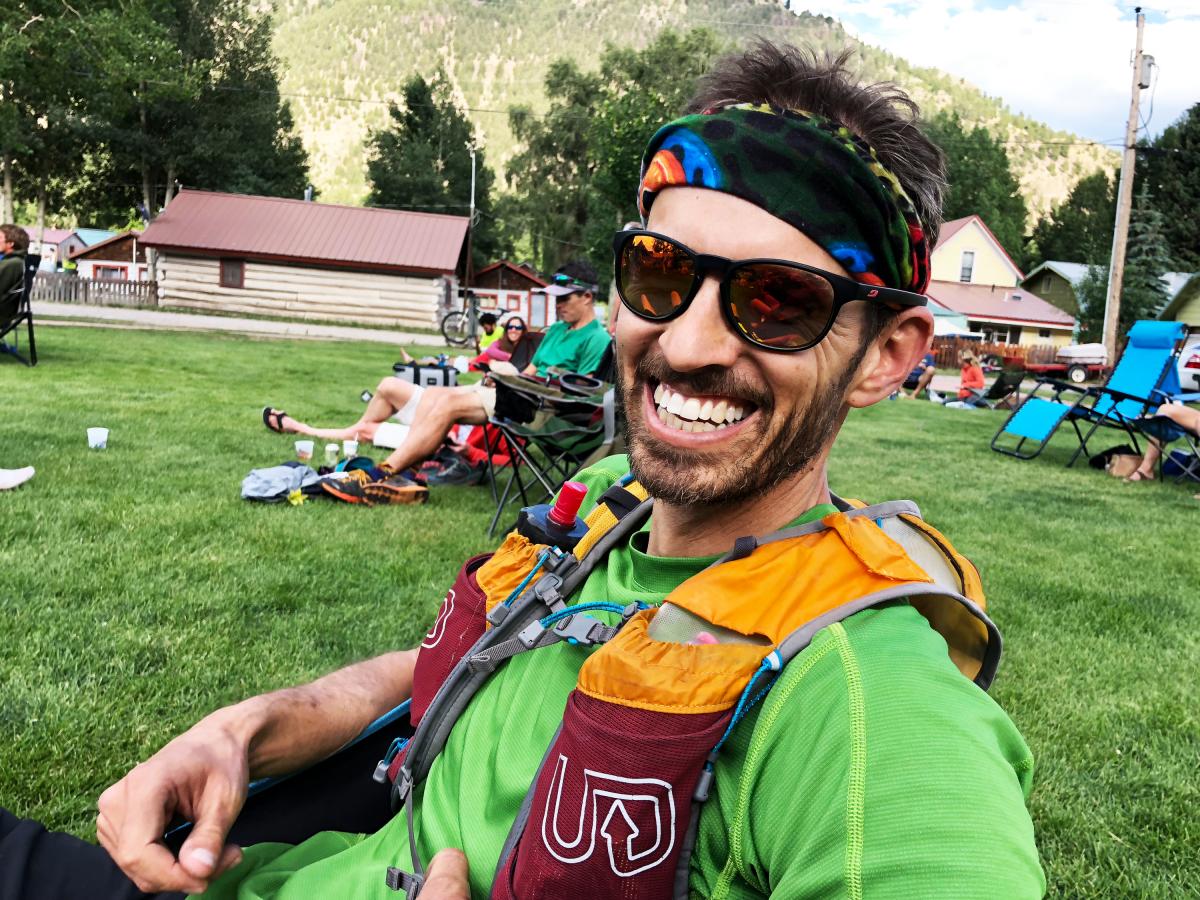 Soon I’ll run my longest race yet—64 miles. My family and friends will be there to crew. Volunteers will be offering water and snacks at aid stations. My wife hopes to run the last two miles with me. And through it all, I get to run for 18 hours with my Father by my side and a smile on his face.