A funny story about CS Lewis. Near the end of his life, he had a full-time caretaker. Because that caretaker worked difficult hours, he slept during the day, in a downstairs room in Lewis’s house. The pair maintained an aloof relationship until Lewis, sick of the professional atmosphere, built a wall of books around the sleeping caretaker, barricading him in bed, and all I can think of is that CS Lewis had enough books on hand to build a substantial wall.

Dallas Willard, I’ve heard, bought the house next to his to store his expansive library. Seth Godin is famous for reading like a fiend. Last year, I volunteered to organize Padre’s garage. It turned out the hardest part was stacking and storing boxes and boxes of books. Think of Jesus—if his myriad references to the Old Testament and his ease with parables are any indication, the man reads like mad. You see the point—find someone influential and you find a reader. Not a casual, read-a-book-a-month-reader. A super reader.

I’ve heard it said reading is like exercise, and it’s true, only, more true than we might think. We exercise because it’s healthy, sure. But we exercise because we’re made to move, because living life in a body is part of flourishing in God’s universe. The discipline—regular exercise—is the price of entry into the flourishing—movement. In reading’s case, the discipline is what I’ll call Reading Parkour. The flourishing is an encounter—seeing the innumerable treasures God has sewn into the universe, all of which we’re meant to discover and rule. 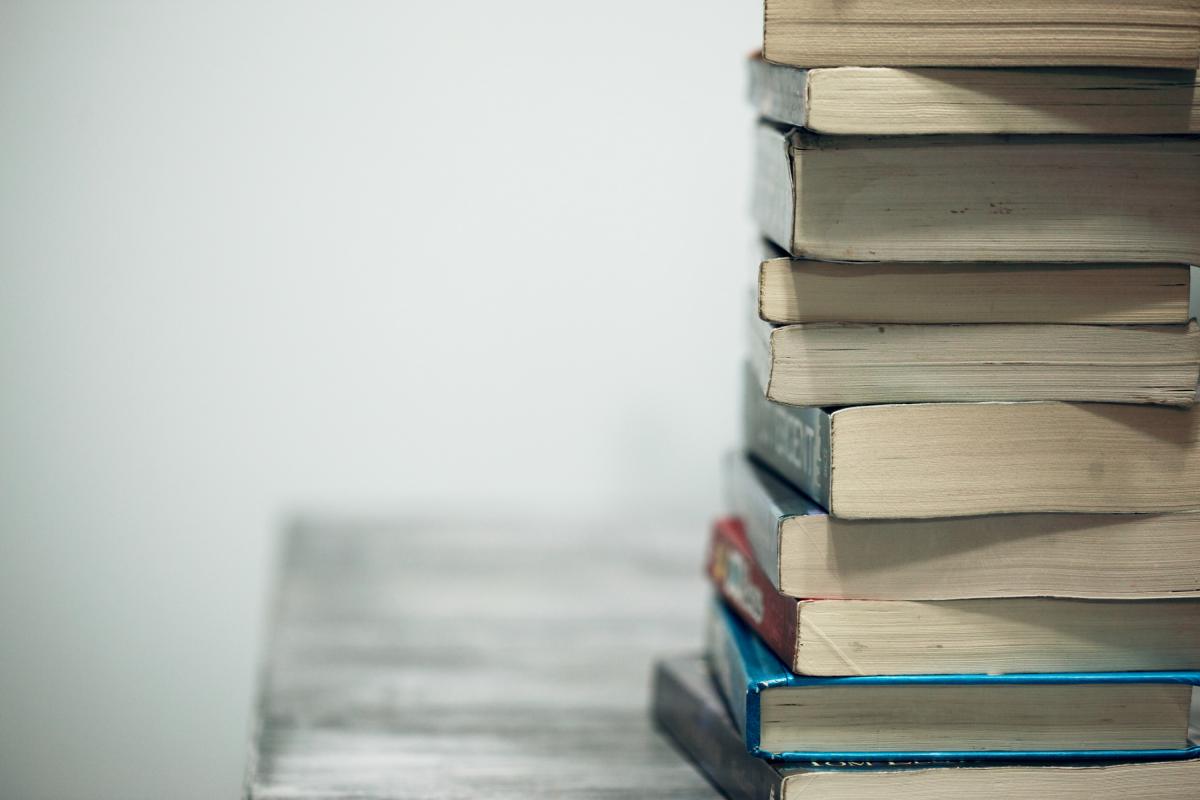 The image works this way—when you’re exploring a city, you don’t go home between every outing. Exploration is fluid. You find a good Yelp review for an ice cream store. While you’re there, you see a little river walk. When you’re on the river walk, you see a sign for a brewery, and think, Wow, I’ve seen those signs everywhere, we should give it a try. It’s the way freerunners move (thus, parkour).

Reading is like that. It’s a process defined by discovery. You don’t go back to Google every time you need a new book. It’s not even enough to search “Books Everyone Should Read” and work through the list, though that can be helpful. If that’s all you do, it’s like going home after every outing in the aforementioned city. You never get anywhere, and you don’t make any of the connections you would moving through the space in a dynamic, moment-to-moment way.

I’ll pause though and out myself: I don’t count as a super-reader and I haven't won any awards. Nope—I used to think more highly of my reading habits but I’ve since found they’re not remarkable. Sam’s wife, for example, reads like an Irish Monk, much more than me. But, in the process of learning the lifestyle, I’ve found the following nine tips to be helpful.

Also, all of this works for audio books.

The greats read even more. Like time to exercise, time to read doesn’t appear. It’s time you choose for the development of your soul. I read in the morning (unless my daughter wakes up early), around lunchtime and while Em is brushing her teeth. If you’re male and married, it’s likely you spend a lot of time waiting. That’s all great reading time. As with exercise, I allow myself recovery weeks after slogging through tough books, but I keep new books lying around. In time, I'll find myself picking them up again, and, ta-da, I've rebounded.

2. Your books are your reference works.

Let’s assume you’ve read at least one book you liked. You’re off to a great start. I try to read (or listen to) at least one interview with every author I admire. Either the author or the interviewer will almost always mention a half-dozen other authors. Jot those down. I’ll usually reserve library materials en masse after reading an interview and sift through the lot for the gold.

Similarly, super reader Ryan Holiday admonishes his followers to read at least one book mentioned (or cited) in every book they read. It’s a great trick. If you chased down half of what Padre mentions in the epigraphs of his books, you’d have a lot to work with. I discovered almost all the art theory I’ve read by reading books Tolstoy mentions in the first chapter of What is Art? I haven’t read anything like all the authors he mentions, because it’s an astonishing number. When he died, Tolstoy’s personal library included 22,000 books, 5,000 works in foreign languages, and even ancient texts. It’s true many of those were sent by his fans (and that Tolstoy’s library was founded by a prince-grandfather of his), but it’s also true his library includes books in Greek and Latin with Tolstoy’s notes in the margins.

I’ve been told this a lot. Read the preface, the introduction, the editor’s notes. Most of the time it drives me insane—I feel like I haven’t started the book—though by the end it’s always worth it. I’ve always liked Ernesto Sabato’s book El Tunel, but I didn’t really get it until I read a forward by Colm Tóibín in one edition. Read the footnotes and the endnotes. To get hooked on this, read either of Steven Rinella’s books, either American Buffalo or Meat Eater. To see how far this can go, read Nabokov’s Pale Fire.

4. Read one old book between every new book you read.

This advice is from CS Lewis and it’s the best. Our age is tragically near-sighted. Dig around, and you’ll see we seem to like contemporary ideas just because they’re contemporary. It’s an indication of the self-obsession of our era, but it has an easy fix: read old authors. If you’ve never read the classics, Iliad, The Odyssey, Aeneid, Beowulf, The Faerie Queen, Paradise Lost, etc, they’re worth the time. The key for me here (in all cases) was to find editions I liked to hold. This has really helped me like reading the bible more, too. A year or so ago we finally found one that’s plain fun to hold. These editions are best discovered in used bookstores, which almost always have twenty versions of any of the above. Ask Quora which translators to trust and go in with their names on a notecard. Bad translators make heavy sledding. But, read Seamus Heany’s translation of Beowulf (or book VI of Iliad), and the work comes alive. Reading old books is a great way to depart the uncertainties of our age, too. Notice: we’re very obsessed with the present (which is uncertain) and the future (which is doomed), and it tends to obscure our vision.

5. Read everything your favorite authors have written. Continue to do so as you like more authors.

Have you read all of Shakespeare? I used to be scared of dead authors. For whatever reason, I didn’t like the idea I could read everything they’d written. That’s changed. Most of us went to high school, so we know William Shakespeare is the dude. It’s crazy we haven’t read all his plays. There’s only 37 (and maybe a bonus) and they only take a few hours to read. Still, they’re some of the best inquiries into human nature around.

Before doing that, read Bill Bryson’s book on Shakespeare, which is sort, funny, and will change the way you see him. This is a way of saying, read book about great authors.

This means reading across genres, and reading above your level. It’s ok if you don’t get it all. Reading harder books, even a few pages at a time, or a few paragraphs at a time, produces substantial changes in our ability to make connections between books. For me, this has been a gradual leveling-up. If you like Dallas Willard, try George MacDonald. If you’ve read CS Lewis, try Charles Taylor or Christian Smith. Try the hard books trusted authors mention. They can be near-impenetrable, and even so, there remains the thrill of tangling with greatness, reading against original genius. I’ve leant out Einstein’s Relativity a dozen times for this reason: it starts accessibly, and gradually becomes so difficult even experts scratch their heads. That’s a good thing. Remember: not every book is something to base your life on. Some books are just helpful to understand your moment. But keep the next rule in mind:

7. There’s always a good reason to skip a book.

This means, you don’t have to read anything. I’ve been told the opposite, and it’s very unhelpful. We’re all in different seasons; we’re all under different warfare; we all have different missions in the world. This will effect which books we can take at a particular time. Some people can read Gabriel Garcia Marquez without batting an eye - it’s not true for everyone. Some folks can read history no problem—I found the traumatic bits of S. C. Gwyne’s books too much to read through. I don’t recommend someone muscle through. When I graduated high school, Padre advised me to go ahead and breeze over sections that didn’t land. If it became relevant later, I could come back. Ask Jesus which books you should read. He’s trustworthy and the only person who’s familiar with them all.

Not a fancy tip—have easier and harder books around, so you can pick up what you have energy for. I’ve got a popular and difficult book on beauty (Von Balthasar, A Theological Aesthetics) above my couch, but it’s sitting beside The Indispensable Calvin and Hobbes.

9. Looks at your friend’s libraries; ask to borrow their books.

This is how I found Steinbeck (we didn’t read him in high school), Mary Karr, Seth Godin, Anne Lamott, Kazuo Ishiguro, Zadie Smith, books by Melville that weren’t Moby Dick, Viktor Frankl, too many others to mention. It’s more fun to read books your friends know because you can talk about them, and you’re more likely to finish a borrowed book quickly.

The Life of the Soul in the World

Nonfiction/I don’t want too many categories

Taking on Triathlons up Announcing the Print