Dystopia: How Not to Look for the Apocalypse

I guess everyone knows the world is ending. I mean that we’re ending the world. Because that’s the unique thing, after all. Sure, every generation sees the apocalypse coming, but our generation knows it’s underway and that humans are causing it.

If you don’t, don’t skip this article! We’re not going to spend any time swapping notes on stuff we already know, like that human beings can be selfish and are pathologically myopic decision makers. Nah—we’re going to talk about apocalypse and dread and its effect on the soul.

I return to the world. As I said, every generation since Aristotle (check the Poetics*) sees the apocalypse coming. The ancient Scandinavians wrote that the world would be swamped, flooded, drowned, all the good gods—Odin, Thor, Loki, the ones in the movies—would die. It’s a sad story, but it’s hard not to hear a note of grim anticipation. In the 1950s, more than one person thought the Soviets would lobotomize the world and everyone’d be a drone, like a global anthill, except that instead of a Queen ant you’d have Gorbachev, propped up in a lounge chair toasting himself. (This is not an exaggeration. If you’re interested and don’t mind disturbing reads, try the dry, morbid book American Lobotomy by Dr. Jenell Johnson.)

On and on it goes. People prognosticate: famine, fire, water, etc. I don’t remember exactly what was supposed to happen in Y2K, but I’ve got an image of deranged computers turning on their craven operators, rabbit-eared TVs poisoning water sources, that kind of thing. But here’s the critical difference: in earlier apocalypse stories, it’s hard to miss the jubilant strain. After Ragnarok, the world is reborn. That’s not hard to hope for. If it’s the 1950s and the Soviets invade, so be it—Patrick Swayze survives and starts a new life in the hills as in Red Dawn. Patrick Swayze can survive anything.

Our own apocalypse stories are grim. A desolate remnant of human beings wanders through sooty cities shanking one another with garden tools—the lucky ones have handguns. The oceans are dead. Forests, too. If there aren’t zombies, there are cannibals, which amount to the same thing. This is not a clarified vision. It is not realistic, I mean. It is a withered imagination, and it has an effect on the soul: our visions of the apocalypse are defined by dread, a creeping despair. 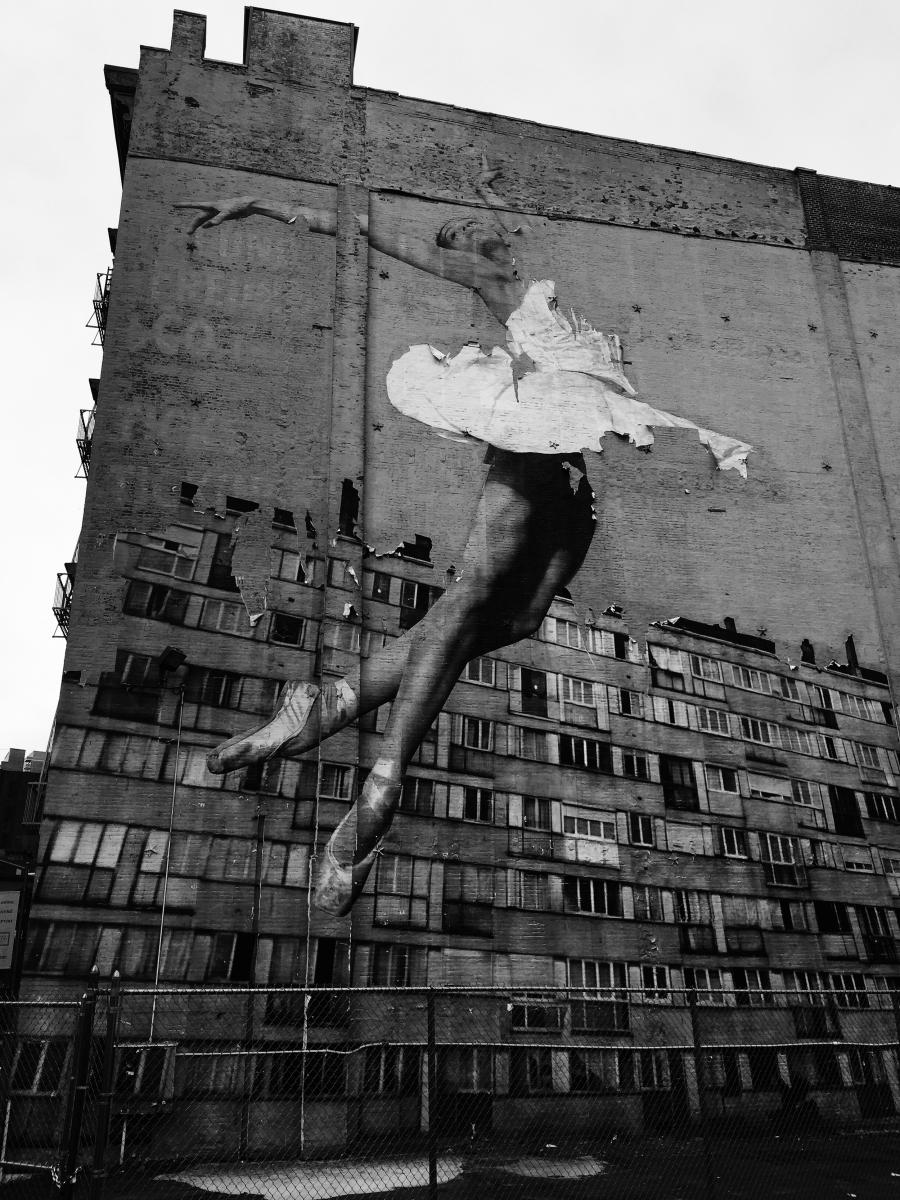 It’s not hard to see why, though. The oceans don’t look so good. Neither do the forests. Maybe you don’t think so, but the general consensus is clear, and to prove it, look at the stories we tell ourselves. Cormac McCarthy sets a man and his son on what’s basically a moonscape, dodging cannibals, dying in the end (spoiler!), and wins the freaking Pulitzer Prize. I mean, we pin honors on the dude who says all flesh is grass, like that’s a new idea, not in Ecclesiastes, not Hemingway’s overall point. Why do we love it? Suzanne Collins has kids cut each other’s throats in an arena, and young adults go bonkers—wild!—about it. (For some reason they don’t also love The Lord of the Flies, but fine.) Keep whatever personal vision you like, the public vision of the future is dim, monotone, ashy. No more frontiers (except maybe space, but it looks cold, metallic, void, maybe haunted, and doomed anyway). Not much of anything left, it seems: time, trees, fish, chances, and if you check the teeth, it’s clear no dentists make it.

So what’s the deal? Well, it’s philosophy, of course. It’s a worldview, weltanschauung. We don’t know what to make of endings. That’s unhealthy, and I’ll cut to the end of the argument: we’ve let the Kingdom of Darkness color our anticipation of the end, THE END, with its own. We’ve done it in two ways.

The quality of the finish line. What do we make of endings? People have gone back and forth on this one.

Some say, See, at the end, it’s horrible, there’s nothing else. (Iago, Nietzsche, Harold Pinter to some extent, Samuel Beckett sometimes. As he wrote, “They give birth astride of a grave, the light gleams an instant, then it's night once more.”)

Others argue, No, there’s no despair at the end; there’s hope, there’s a benevolent God. (Hopefully you can name your own examples, but if you need two, Gandalf and Yoda).

This is not a scuffle. This is outright epistemological war. What do we do with the fluctuation built into time, the beginning, middle, end, defining story (for now)? Theologian Norman Wirzba pointed out that the world endures by resurrection, making life out of death. It’s clear there’s a lesson there, not a cheap lesson, but something worth knowing. The physical world lives by resurrection; it is not, in its current form, going to last forever. If that’s bad news, then every fresh morning is like the swing of the axe, falling falling falling at the root of the world.

It is the opinion of the Kingdom of Darkness that things end, that’s that. You can see this limited imagination at Calvary. I mean, did Satan actually think that killing God’s earthly body would accomplish anything good, knowing what Satan must know, as a spirit, about the immortality of that spirit? Pause for a moment on this point. Satan is a spirit—the creature does not have a material counterpart. He knows the triune God does not exist in a physical form, except in the body of Jesus. Stay with me! Did he really think killing that physical body would kill the triune God? Of course. Because of his stark realism: a thing that has ended is no more. Kill God’s body and God has no more body. It’s frank. It’s also misled. Because of course a long weekend later, the logic of the Kingdom of God was put on display: everything ends. That doesn’t mean they end.

Hedge your eschatological bets. You’ll see many things wilt, die, wither. If that’s it, tough luck. But if the world is built to persist only through resurrection, then you’ll be geared up for the fight, so to speak. It’s all coming back.

The deeper issue—the real issue—is reality. The bedrock, human nature. Go back with me in time a bit, not far, a half century will do. There are two political theorists you should meet: John Locke and Thomas Hobbes. To high schoolers, these are sour, familiar names. Few folks remember much about them except that John Locke won whatever it was they fought over.

What they fought over was human nature. Put simply, it looked like this. Locke: humans, basically good. Hobbes: humans, bad. I can see Hobbes’s eyes, shining with vindication, as he reads The Road, but even so, it isn’t hard to see Locke winning over time, since it’s hard to go around believing everyone’s evil (unless, I guess, you’re driving). I mean we’re someone, at least, and then there’re the people we love. But now Hobbes is back in fashion: folks are wicked. When you take away hospitals, take away grocery stores, everyone’s a savage. That’s the point of our apocalypse stories: to show human beings laid bare and see how selfish, how evil, they are.

Did you know the word apocalypse means to reveal, by the way? To reveal what humans are, what the world is, who God is?

Tricky, see? Because of course people are selfish. That’s the Fall, happening over and over and over again. That’s the flesh, old news in the oldest testament sense. But there’s this other thing, the imago dei. The image of God people carry. And there’s the restoration of the heart available in Jesus. A real new heart, shiny as a Christmas present, but obviously better. Because of that, you can take away everything, and not everyone’s a cannibal. There is a prevailing goodness in the very worst things, the inextinguishable presence of God in the world, and, in the case of those who’ve turned to Jesus, in the human heart itself.

That’s another reason why our current vision of the end matches the Enemy’s, though. I don’t think the Enemy believes it, that bit about the heart being good. The Enemy does not understand goodness at all. But people literally die in the service of others, after the model of Jesus. This is a great mystery, but a mystery at the core of the universe. Our apocalypse stories usually don’t buy in—the flesh triumphs there.

But see something. Every story ends. Ours will end, in a manner of speaking. And at that crescendo there will be incredible goodness, seen still in some people. And after it, there will be restoration.

Probably the best apocalypse story comes right after the Old Testament, in the pause, the 400-year caesura before Matthew, Mark, Luke, and John. Israel is mostly restored in Malachi, but, no king, Persian rule, it’s no powerhouse. Turn a page from Malachi and things’ve changed. The nation’s occupied again, by Rome, you’ve noticed. The vision of a restored, national Israel is lost forever. The New Testament is, therefore, post-apocalyptic. It happens after the destruction, after the toppling, after the revelation that the plan isn’t national. And what happens in that post-apocalyptic world? Is the end the end THE END? Not exactly, as you’ve seen. The national Israel becomes the post-national Israel, as God’s people, the ones among whom the holiness of God can dwell, become those rescued into Jesus, whose Kingdom endures forever. See that? And what about the flesh? Rampant garden-tool shanking? Um, no. The incarnation happens in that post-apocalyptic world, and then the resurrection, and so on.

No so dark, ashy, doomed. But still, pay attention. Our fears about the end, our sense of doom, it all has an impact on our joy, our hope, our love. Keep it simple and still, it sort of wears away at you to walk around anticipating Mad Max and his cohort. It’d be worth looking under the hood to see what you’re anchored in, what you think of the end, meaning is it doom, or is it restoration?**

*But Blaine, you say, the Poetics is drama theory. So it is, but look. It’s the first place, maybe one of the first places, a guy in the West wrote down the fact stories have a beginning, middle, end. I’m sure some folks knew it already, intuitively, fine, but still ever since he jotted that note we’ve all been very concerned about that third bit.

**Need some help anticipating and we’ve got a book for you: it’s by Padre, in this case, and it isn’t out yet, but it’s called All Things New and if you take a look you’ll learn it’s one of the better investments you can make for your soul.

Be a Man, Learn to Cook up Stressed Out