Be a Man, Learn to Cook

So this got started while I was at a hospital, or at least right after. My good friend and climbing partner had taken a bad fall. We’d gone to the hospital to have folks in the know take a look at his head; he was cleared, and now we were hungry. His fall had happened a long time before and besides, relief makes you ravenous. The problem was, everything was closed, except for late-night southern California supermarkets, which is where we went: a lit room of vegetable chaos. I knew a little about the produce aisle, like which leaf lettuce was (though not that it was related to the daisy) and where Gala apples were, but most of it was a mystery, so I was surprised when my buddy—now on crutches—draped a basket over his arm and hobbled energetically between baskets of flora. He snatched up unfamiliar things like he was eight years old and it was an Easter egg hunt—not an injured 20-something approaching midnight. We bought stuff, we paid. Trevor (his name is Trevor) texted a friend; the friend was up, we went to his apartment.

This is where the story takes a turn, as you’ve probably guessed.

The apartment was dingy, but the fellow living there knew something about food; after he’d vanished into the kitchen for maybe 40 minutes, he came out with laden plates. Goodness.

The nine or 10 vegetables, recognizable beforehand at least as plant life, were gone. Little looked familiar. It was kind of a pasta dish, though I didn’t remember buying pasta. There was a purplish sauce and little savory knobs rolled in something beany and fried. The knobs were the vegetables, I guessed, though tackled in a way I hadn’t seen. The bread at least I recognized, though it had been expertly warmed—crunchy, though the moisture remained—and rubbed with rosemary and garlic and a butter sown with warm spices.

I can’t quite say how startling it was. We’ve all had good dinners, fine, but if you’ve left home and then returned to find the house painted or a cousin 100 pounds lighter, you’ll know the feeling. It was a transformation that made me sort of distrustful. I felt the cautious intrigue people feel near circus magicians or revival preachers. Something magical had happened. The regular stuff of life—radishes, lettuce, roots and such—had become…what? Art? Medicine? Something good.

So that’s how it started. I wanted to know what Mr. Chef had done, and I bought a baking book, not yet knowing that baking and cooking are different disciplines. It’s called Ratio by Michael Ruhlman, and I’d recommend it to anyone. It doesn’t have recipes, it has ratios (surprise!). Those ratios undergird all baking (3-2-1 Pie Dough!). I learned to make bad pasta and reasonable scones and then left off. I might have drifted away from the kitchen completely had not another culinary savant graced my table several years later. I’ll keep this story short: I’m at college eating mostly lentils, and then this dude, a friend of a friend, shows up with a bag of beets and goat cheese and walnuts and some other less familiar things. He makes dinner, it’s good, and that could have been the whole story except for two accidents of history.

1. Contrasts. While this guy (I don’t actually remember his name) cleans up, he mentions that all cooking comes down to contrasts: flavor, texture, temperature (you can also contrast color and shape).

Get out your phone and write this down, because I’m changing your life here and not asking much in return.

So this guy starts with beet, thick slabs of it. Sweet and cold, with a taste that’s kind of like rain smell. He adds goat cheese for a savory flourish, but the dish is still cold. He adds a heated balsamic vinegar, which adds heat and sourness (or acidity). Last but not least, there’s the texture: everything on the plate’s tender and chewy, and no one likes that. It’s like having green bean casserole with no crispy French onions. So he adds toasted walnuts. More heat, and some crackle (crunchy). Add cracked pepper and salt because it’s salty, and boom! Amazing.

That was principle number one. 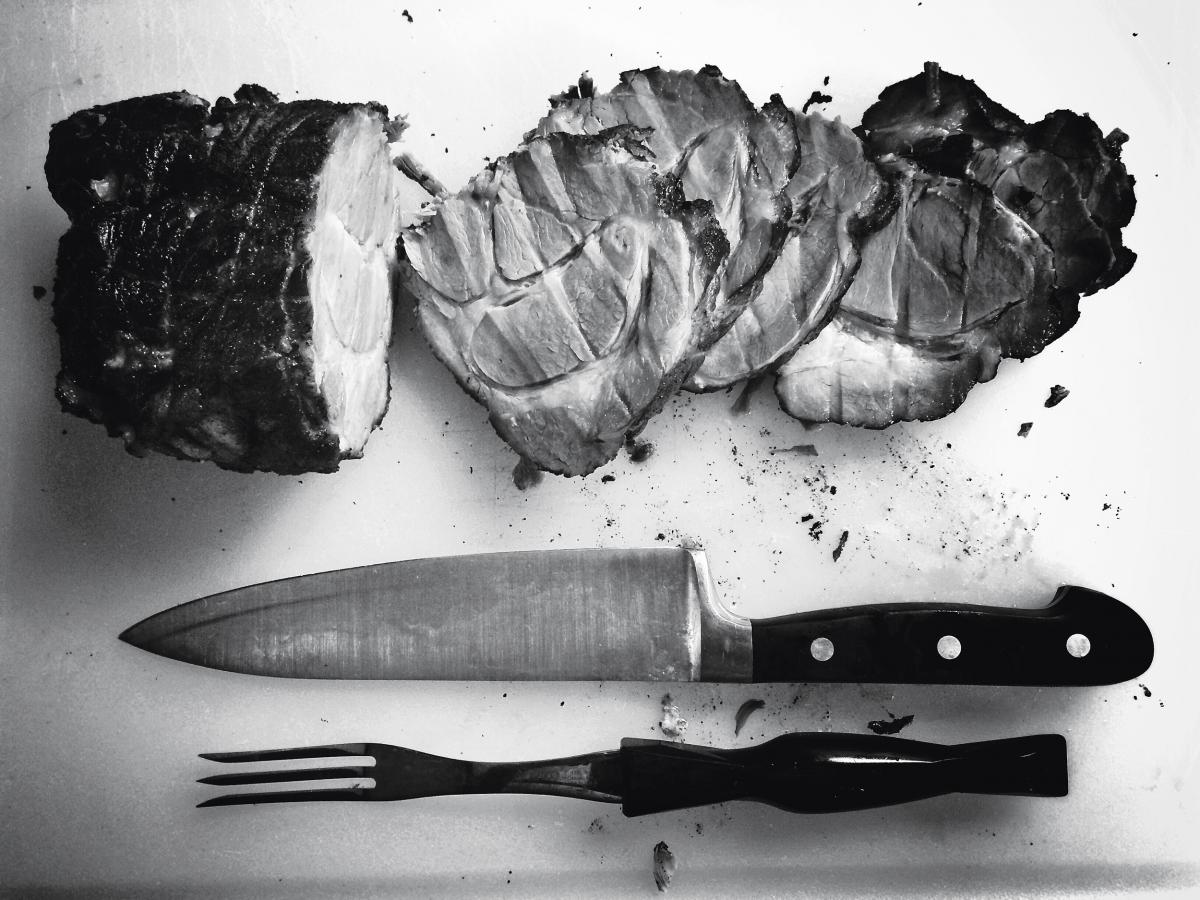 2. A knife. He forgot his chef’s knife, and I didn’t return it, not for several months, because he lived in Seattle and I allowed myself an admittedly questionable ethical exception. But I’d been hacking away with thrift store knives, and a good chef’s knife opened my eyes. A good knife makes you the boss of your vegetables. They get nervous and obey you. I cut a tomato like it had a zipper and for the first time enjoyed cooking as a manual skill, like working on a car (I guess) or throwing pots on a wheel. Cooking without a good knife stops many otherwise enterprising new cooks.

And there I was. Thinking about dishes, not as soups and pastas, but as flavors and temperatures, artfully arranged. It was a good beginning, enough to get me hooked. I started making lentils with turmeric (hot, savory) and then tossing on a dollop of apricot jam (cold, sweet) and some cashews (crunchy). Delicious. Or how’s about tacos? You’ve got a corn tortilla, warm, savory. Mashed black beans. Things are still savory. On comes the roasted garlic, whole, and then some sautéed onions (sweet), cilantro (I find it bitter, not everyone does), something pickled for saltiness and coldness (usually onions, but try capers. It’s weird and good). Fantastic.

If you’ve got 1. (Contrasts!) and 2. (A Knife!) in hand, you can start in okay, but to give you a truly solid push and all the advantages, you’ll need basic techniques. The good news is you only need three, really. Probably everyone knows that to cook food you have to heat it, but it’s how you heat it that makes the chef, and the three techniques generally agreed upon are braising, roasting, and sautéing (folks also recommend grilling but I don't own one).

This part is easy. 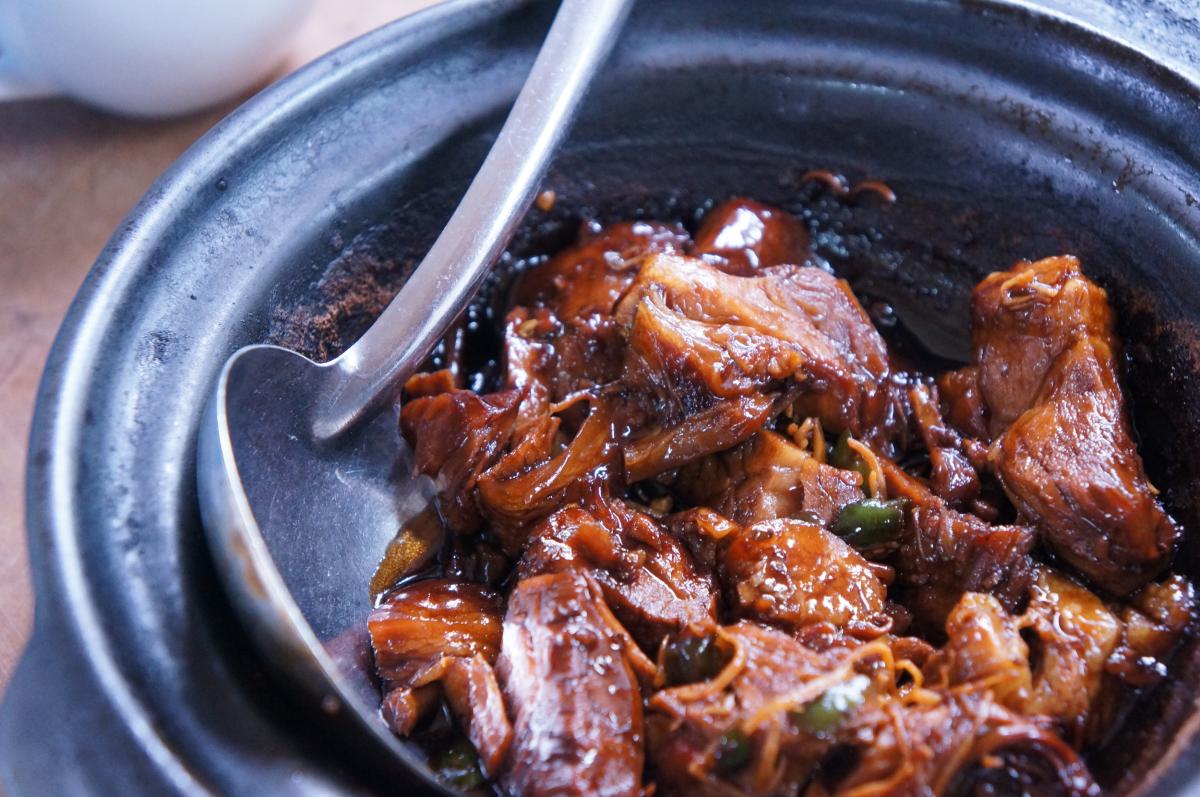 To braise you cook something in liquid; water will do. Toss a roast in a crock pot, cover it with water, and you’re braising, just like that. I could wax poetic on the advantages. The water turns into a broth, for one thing. If you braise potatoes and carrots and (who’s to say?) an onion or two, you’re well on your way to a stew. You can braise basically anything you can eat, and here’s an idea to prove it: toss garlic, onion, cut ginger, tomatoes, and some cracked red pepper in a pan. Add a can of chickpeas and some leafy greens, like kale or spinach or chard or whatever. Cover with a couple cans of coconut milk and water if you need it, maybe a splash of lemon juice (for sour reasons) and some salt, and bring it to a simmer. You’re braising. Let it go 30 minutes and pour the mixture on rice or a roasted  (#2) potato. To bring out other flavors, try sautéing (#3) before you add the liquid—most recipes use all three cooking techniques, but you don’t have to use more than one at a time to make tasty dishes, and the process of elimination makes it easier to learn. Braise away.

You can even braise bread, though you do have to be careful with that one. 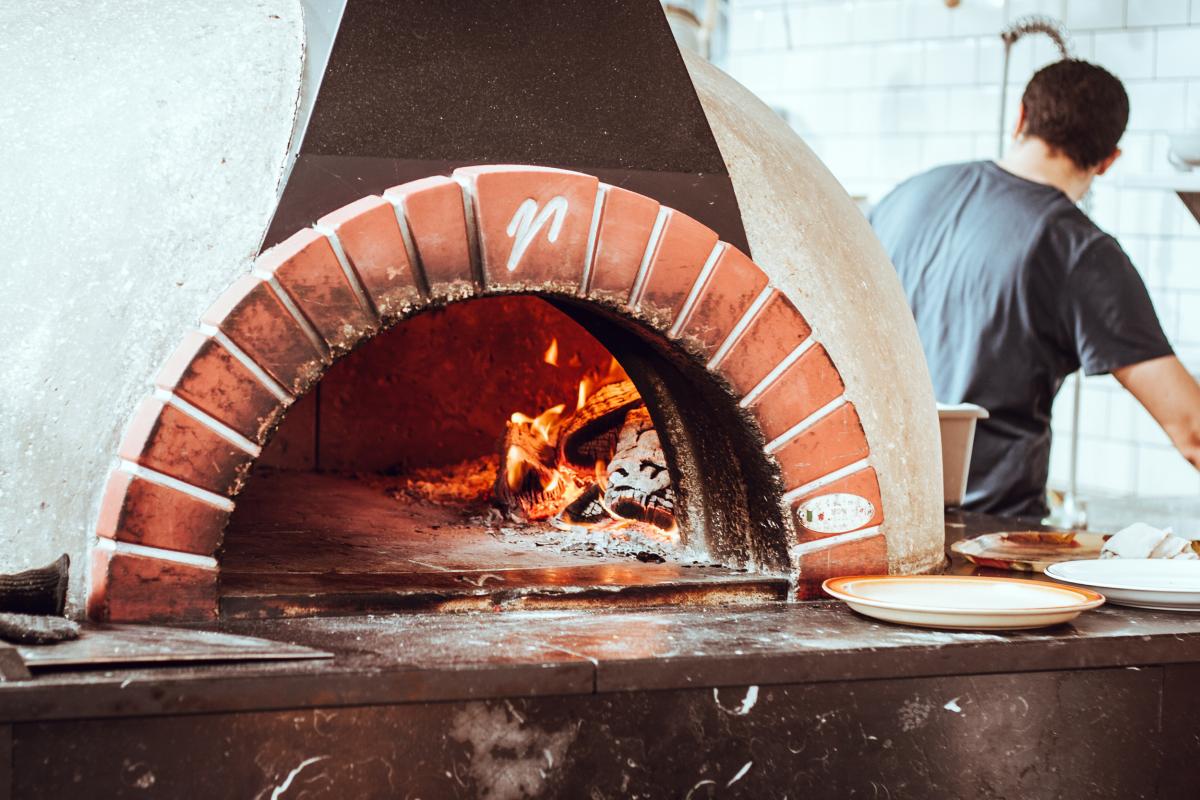 To roast something, you apply dry heat. It used to be over a fire, but now it’s mostly done in an oven. The nice thing about dry heat is that things burn, and so you get a sugar conversion, like crispy potato skins or blackened tomatoes. Here’s another good one: put two cans of tomatoes, a chopped onion, and some garlic on a baking sheet. Heat the oven to 350, roast it till the tomatoes are blackened a little on top, and puree the lot in a blender. Add salt and a little cream (if you like), and you’ve made tomato soup. 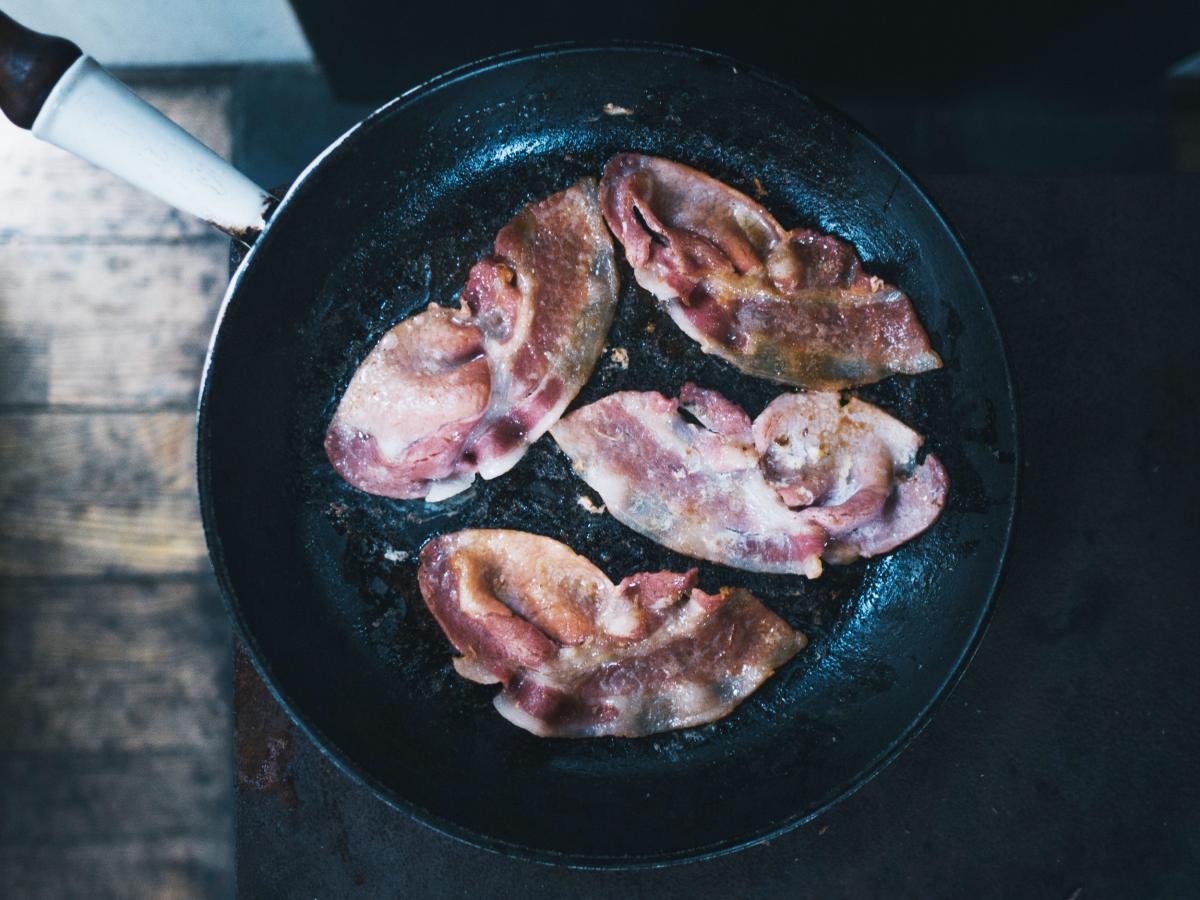 To sauté something you put it on the stovetop and let it jump (the verb whence sauté comes) in fat like butter or oil or just plain fat. Bacon is sautéed. Those stovetop onions are sautéed. I dare you to go wrong with sautéing, though you should know that it tends to break a thing down, so hard things become soft, and soft things become mushy. Like, sauté a peach and you’ll get a peach sauce. I commission you to go and try anything edible. Need a push? Take some roadkill deer, cut it into strips or cubes, something even. Heat fat in a pan, oil, butter, ghee, whatever, toss in the roadkill, cook it till it’s brown, then add chopped vegetables (broccoli or brussel sprouts? The ever trustworthy peppers and onions? Green beans? Squash?) and cook the lot till the vegetables wilt or look done (everything is done at 150 degrees Fahrenheit, by the way. Thank you, Tim Ferriss*, for that particular tidbit). Keeping contrasts in mind, add something that shouldn’t work, like pineapple or peaches or something weird, salad dressing or jam. Go wild—there are principles which resemble but do not mimic rules, and so follow the principles.

That’s it. You’re off. The kitchen is your ship and you are the captain.

Just one more thought about Chef Life. Food is communal, and cooking is communal. If you’d like to get into it, you need other folks involved.

Before getting married, I would braise a large batch of beans—it didn’t matter what kind—and eat them between mouthfuls of uncooked spinach pulled from one of those plastic bins. I also ate peanut butter, plain, and the point is that even after I thought cooking was fun I didn’t do it unless I did it with someone or for someone. It’s a key point: though I knew a swell gal in Canada, a really real Chef, who cooked herself fancy meals, the rest of us need birthdays and dinner parties to get going. Invite friends over or make it a contest, and then you’ll learn what cooking is.

*Tim Ferriss brings up a point, which is further resources. Tim’s book, The 4-Hour Chef, is by far the most important, and not only because it teaches you how to forage and dress a deer in the field. It teaches you everything. After that, basically anything by Michael Ruhlman is helpful, though his compendium, Ruhlman’s Twenty, gives you the best bang for your buck. In general, stay away from books that give you recipes and not techniques. I feel such books are intent on making us all lifetime cripples so we need more cookbooks or recipe websites. Here’s one more recommend, a bit of a surprise: The First Forty Days: The Essential Art of Nourishing the New Mother. It used to be that when a woman had a baby, she’d have a lying-in period, where she did as little as possible, and people brought her food. This book builds on the tradition. It talks about techniques, though it does have recipes, but it also talks about the soulful dimension of food. How butter feels as an emotion. How stews function relationally. It’s a good one.

Discernment: When is it a Closed Door, When is it Adversity? up Dystopia: How Not to Look for the Apocalypse