The Jedi paused; behind the door, she thought she heard the click of boots. “What now?” the rebel said. He was bleeding badly at the hip, his endurance almost spent. The Jedi tensed. There was an ambush, waiting, she knew. She checked the hour: no time. Gaarkhan had promised to hold the docking bay gate, but he could not have held it for long. “We get inside,” she said, “we rescue Han and go.” The rebel thumbed the pad beside the door; it shuddered and shook. “When it opens you run,” he said. He handed her the dice.

Last Christmas, some good friends gave me a large blue box decorated with superheroes. It looked complicated, so I did the natural thing and shelved it for three months until a dark Canadian winter wore away my recalcitrance. In March, I took it down. DC Deck Building, it said. For their color and variety, the cards could have been an ecosystem. My wife read the rules. We started a round.

This was no cribbage game. In an instant, it was all kicks, punches, and the deadly Suicide Squad. Laser vision and the King of Atlantis, presided over by the villain Ra’s Al Ghul. The Green Arrow’s bow made the villains come within range. The Lasso of Truth swept their cronies from the lineup. It was beyond nerdy, I admit—it was devout. And it required a peculiar fascination with cause and effect. 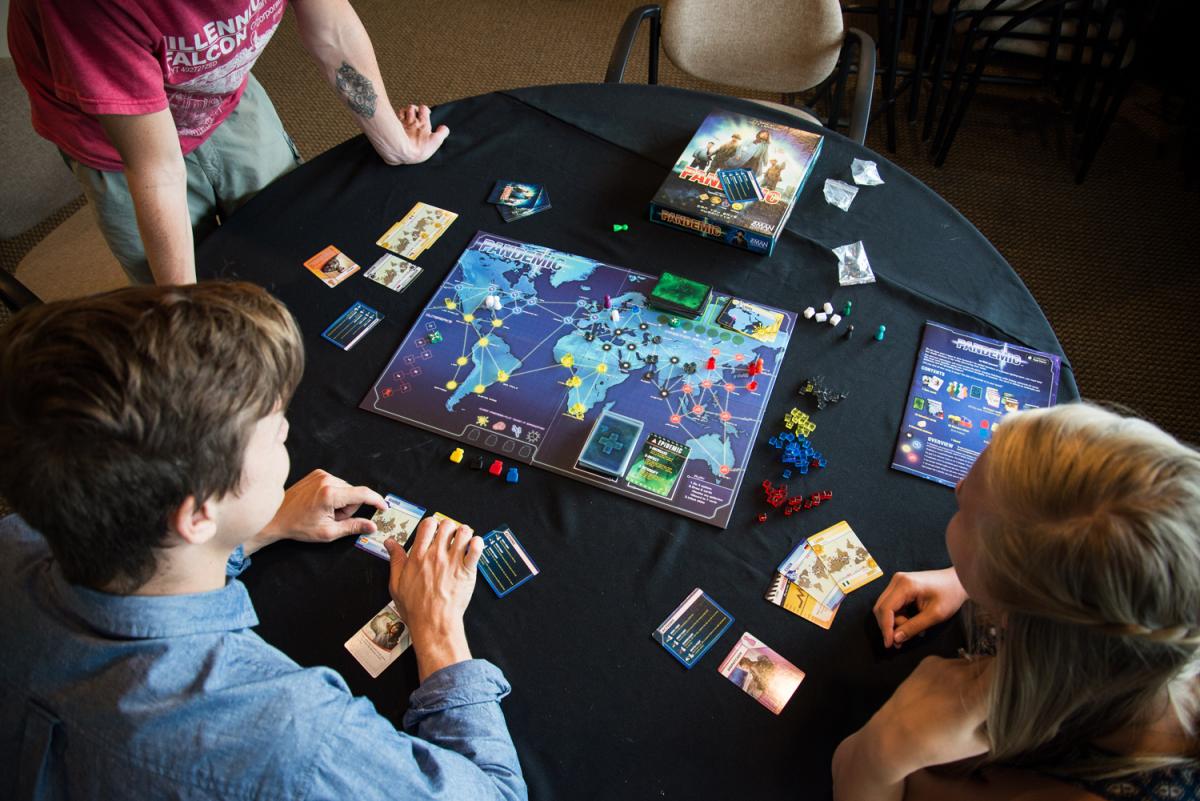 When it comes to board games, most people know about Bicycle playing cards and Apples to Apples. That’s fine, but it’s sort of like knowing vanilla and thinking that is all there is to ice cream, or knowing tag and thinking it summarizes team sports. The world of (increasingly) geeky board games is wonderful. In order to outline a foray, I’ve prepared the following primer, in which I’ll evaluate some of my favorites in terms of the criteria I value. This may be a bit subjective, but since games are played with subjective people, I think it’s a fair way in.

Gameplay: In a deck-building game, each player slowly gathers cards, building from a basic hand. Those cards create complex chains of action and accomplish goals. In the deck-building world, most people have heard of Dominion; it’s a great game, but if you’re going to put together defenses and attacks, you might as well do it with Superman. Marvel has a version too—Marvel Legendary—that’s excellent, if a little more complicated. DC Deck Building’s a winner on its play alone. My wife, who has never seen a superhero film, loves the logic of counteracting cards and wild permutations. BUT I will add that the geek bonus is tremendous. I have seen a great deal of superhero movies and cannot help but feel a thrill as Batman faces off against the Suicide Squad.

Mental Stress: It’s not an easy game to lose, except to your teammate. I’ve played this game on many a relaxing evening and lost no sleep for it.

Community: Superhero lovers unite. Try to land the cards that get you other cards, not the cards that have the largest effect. Think chains over chain rings, or your teammates’ turns will stretch into oblivion.

Difficulty: It’s tough to know why trucks have ABS until you’ve driven in a winter storm. Some of the cards make no sense at all until you’re thoroughly entrenched in the game, but the basic actions of buying, attacking, and defending allow for comparatively easy entrance. 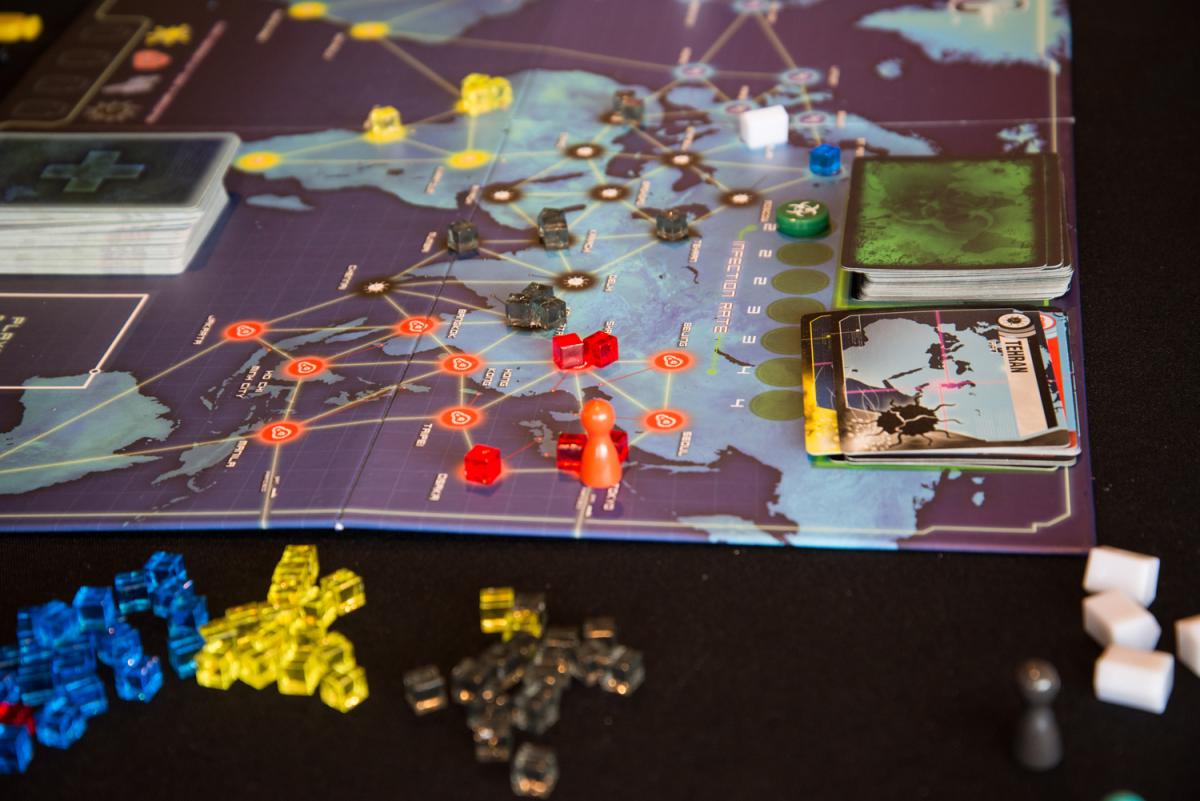 Overview: This is a game to lose with your friends.

Gameplay: Pandemic is played as a group, and not only because misery loves company. The game begins with an infected world and a (not so) highly trained team of specialists negotiating a containment strategy. If that doesn’t sound like fun, think again. That team is racing against three asynchronous clocks: the diseases can exhaust themselves (which makes you lose, oddly enough), they can explode, the players can (literally) run out of options. Better yet, the players are all on one team, all with different abilities, working against a game that’s very well designed to beat you. The game evolves between each turn, so there’s no waiting around. All players need to carefully revise a common strategy, which crumbles before your eyes. It’s the most deliberation you’ll see until next March’s NCAA bracket building.

Mental stress: Have the Dispatcher fly the Medic to Japan to control the outbreak in Osaka! Oh wait, no, we need the Dispatcher to fly the Researcher to the station in Atlanta to develop that cure. Wait, no, the Containment Specialist is already in Washington—we’ve got more pressing issues!

Community: You’re all on a team! Plus, certain characters work well with others, so there’s all kinds of coordination. Everyone is needed. This is a game for that difficult aunt who throws her cribbage hands into the fireplace.

Difficulty: It takes 1 to 10 games before you learn which game developments matter and which do not. I’ll let you know when I finally figure it out. Gameplay can be learned in a single round. 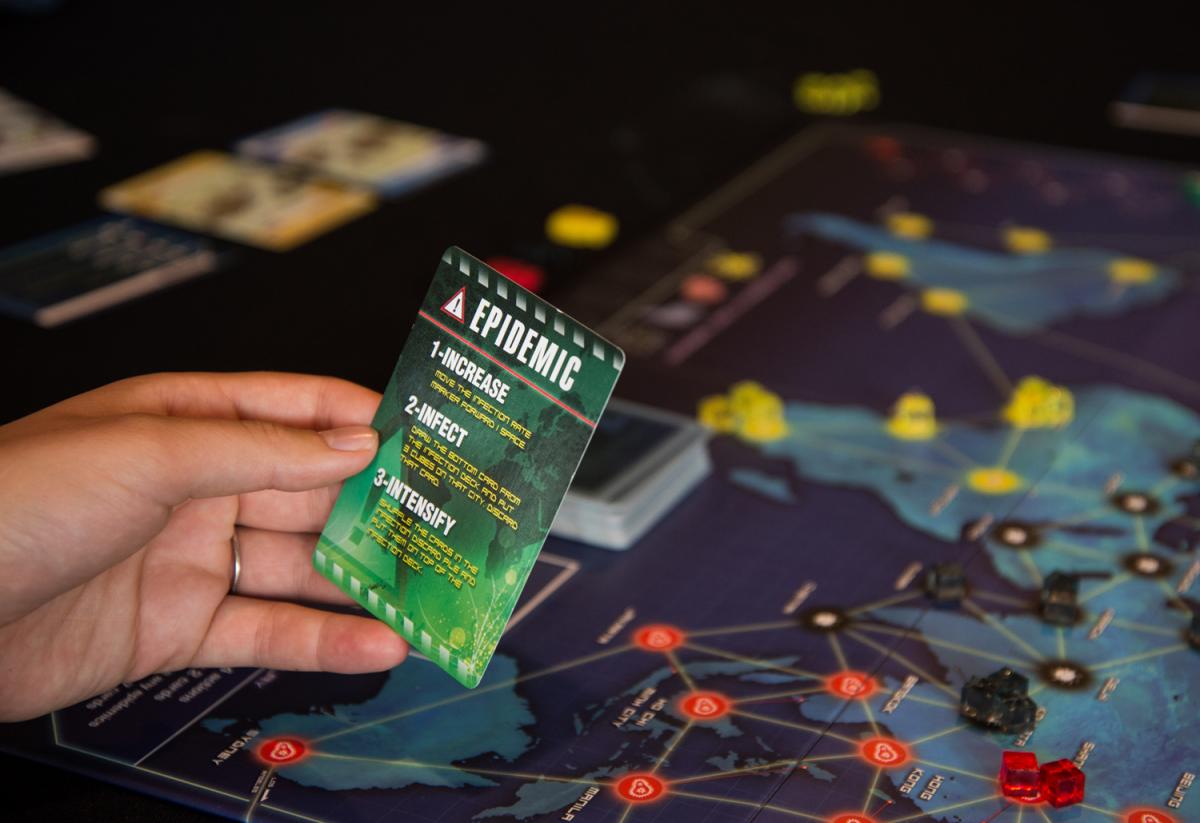 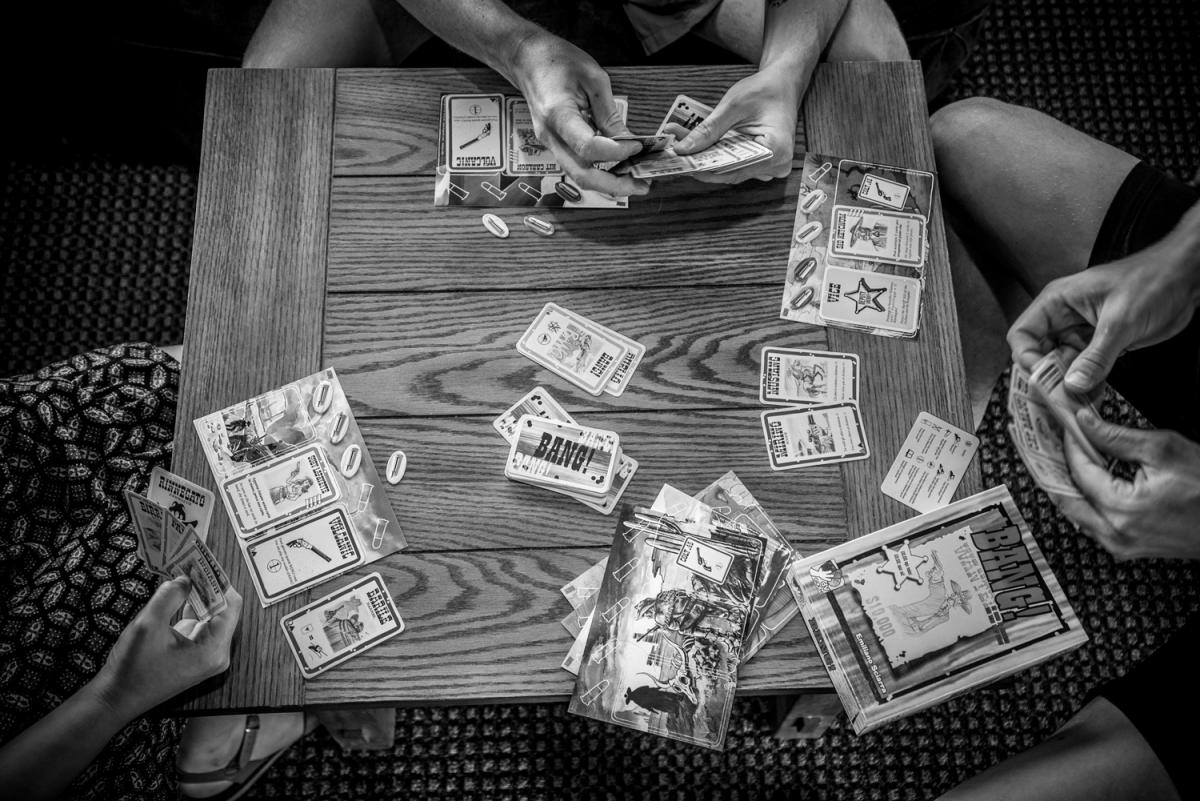 Overview: Billy the Kid stumbles into The Departed.

Gameplay: Bang! is an Italian game with English subtitles. It’s based on the Western movies made in Italy at the height of the genre. Every player gets a role, and every role has a mission. There are Colt 45s, mustangs, and scatter guns. There are alliances and terrible betrayals. It’s a game played with a small hand (like Uno, or Euchre), and each card signifies a different action. Unlike a deck-building game, you drop your cards in a community pile and rarely hold more than six. While there’s not a card to make you use a Western accent, it can hardly be resisted.

Mental Stress: The Outlaws are gunning for the Sheriff, who is backed by the Deputies, but also by the scandalous Renegade, who aims to hide until the end and kill the Sheriff in a duel. Oh, and no one knows who anyone is, except for the Sheriff, who gets a badge. Try to look in your brother’s pleading eyes as he promises you he’s the Deputy and slowly pulls a pistol.

Community: You are enemies and traitors, need I remind you. This is a wonderful game for your imaginative friends and rather more difficult for your feuding neighbors.

Difficulty: The game develops a truly incredible series of permutations. Does a man hiding in a barrel draw for a dodge when he’s riding a horse? No? While the goals are straightforward, some of the scenarios are not (just like a Western!), so it’s important to have a sovereign judge, or at least a sovereign principle. We have a tie goes to the runner rule that works pretty well. If a card can be used to a player’s advantage in dubious circumstances, we let them do it. 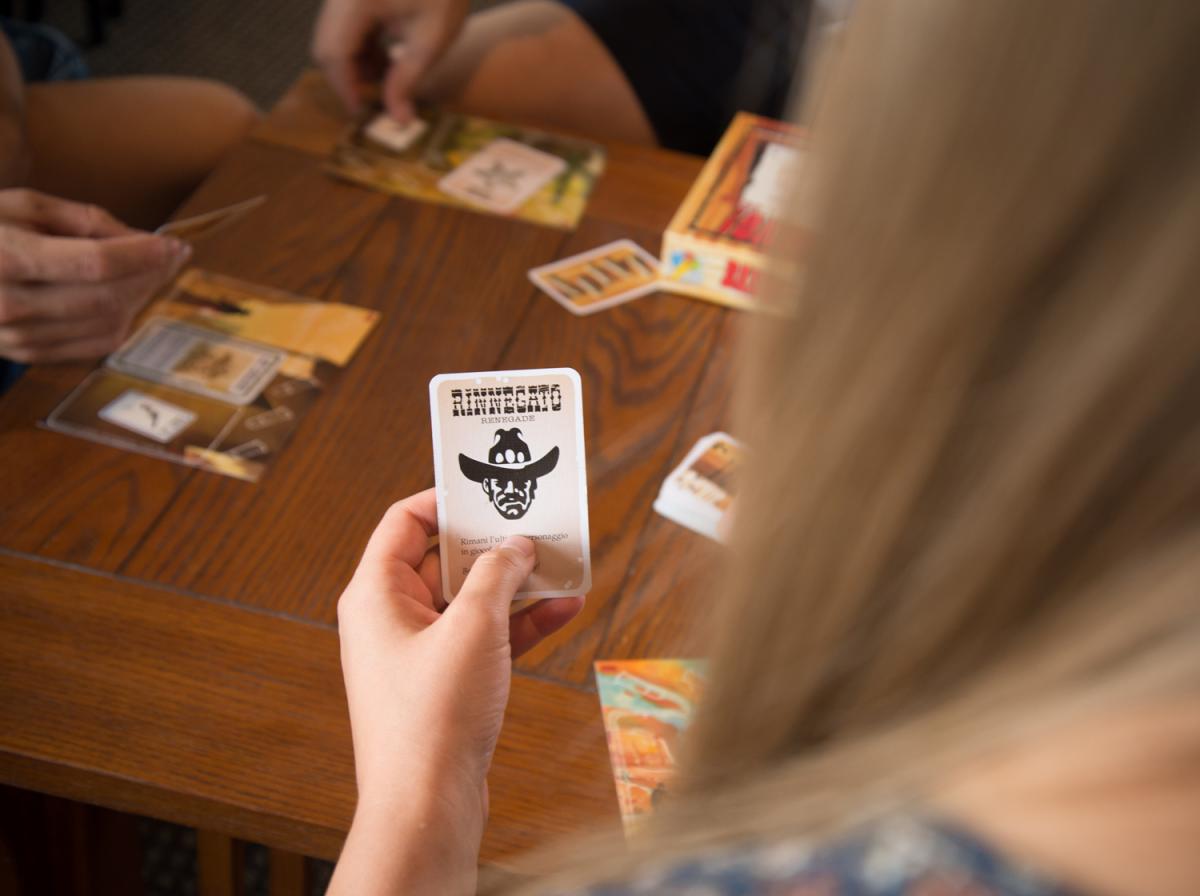 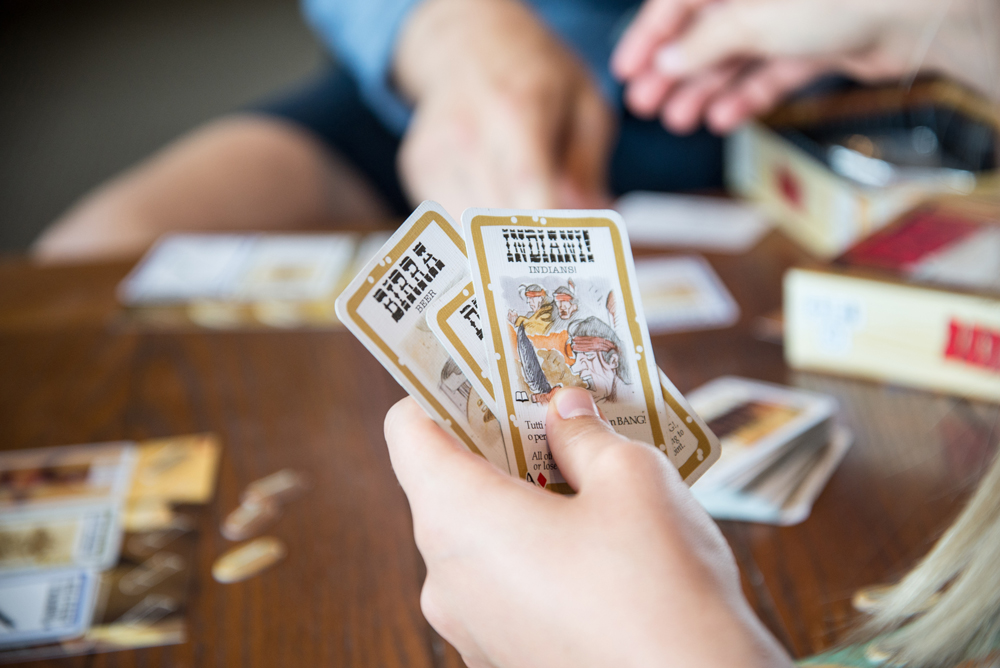 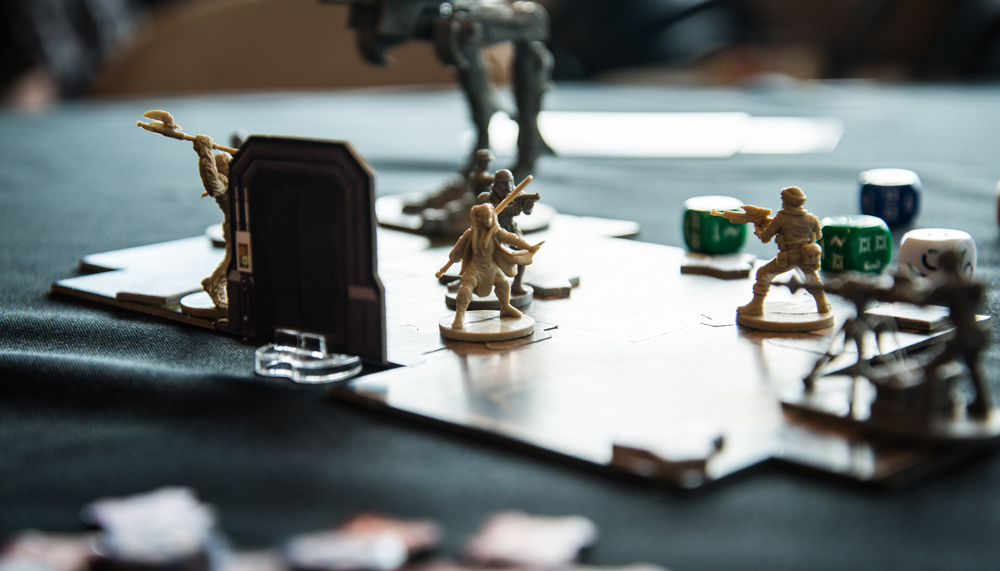 Overview: The Master Chief and Yoda write a choose-your-own-adventure novel.

Gameplay: Imperial Assault marks a threshold most players never cross. It’s overtly nerdy, for one. It involves multiple missions, for another, and most people aren’t used to combining table play with the progression of a video game. That said, if you ever make the foray into the genre, it will be worth your while. Make it a family Christmas present and break it out December 1st. Each player gets a character, except for one, who is the Empire/Enemy. That lucky duck plays as a host of stormtroopers, walkers, Star Wars creatures, and Vader himself. That player also has to understand the game pretty well, so good luck reading through the manual. It’s a combination of strategy and dice, which can be terrible when a sticky palm blocks your every shot. A mission takes an hour.

Mental Stress: Remember in the Star Wars films the way the Alliance had its base destroyed and only won on a hope and a prayer and a final, last-ditch effort?

Community: In every town and college and church, there are a few people who haven’t thrown away their Star Wars dreams or figurines. Those people are treasures.

Difficulty: Okay, no joke, this game has a language. But you wouldn’t spurn Paris just because of French. I spent my first few rounds contemplating the beauty of the player pieces, which softened the edge on the difficult rules. 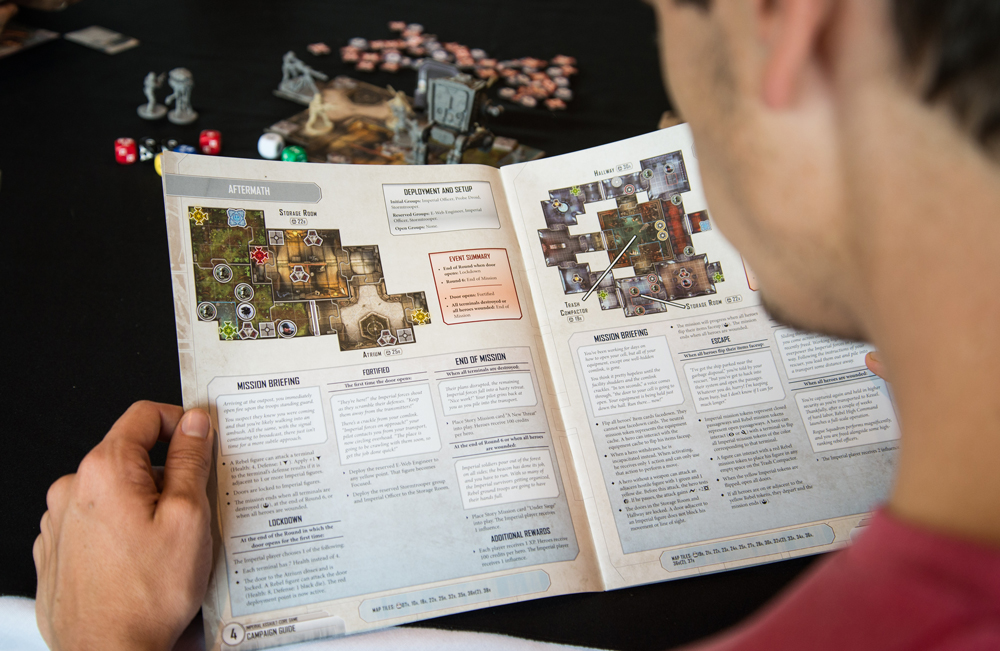 Finally, an important word of conclusion:

Joy is opposed. Board games do not bring forth joy for every ten minutes put in. All the board games to follow can be hours of laugher and tribulation, harrowing decisions and triumph. And, as every family navigating Thanksgiving knows, they can fragment just as easily.

Part of the problem is this: board games are one of the few spaces in a person’s life where they surrender—utterly—to a set of laws. “But wait!” you say. “How would we play games without the rules?!” Quite right. The rules of games create a common standard. In games, the limitation is part of the joy: we have to arrange our strategies from a small set of alternatives, just as part of the joy of painting is developing, from three basic colors, a nuanced palette. However, in games, it is vital to remember that those rules were developed in service of a higher principle: the joy of friends together.

Here’s another example: we build schedules to structure our priorities. The structure is the servant of the priority. If we want to write, we schedule time to guard it. If we want dinner with our friends, we knock off work by five. However, once a schedule is made, it is easy to see it as itself the highest principle. We all know these people, if we are not ourselves this person: the harried set of errands, running from task to task at the mercy of a calendar. They have sacrificed the things they loved to the tool designed to safeguard them.

Here’s what inevitably happens: one person gets six bad rolls in a row. We wince. Another person starts to head downhill after a series of disappointing draws. We tense. Sorry, my friend, but them’s the rules. We begin to serve the structure and not the purpose (which is joy).

I am not saying we should sacrifice our every structure to our whims, only that we should bear in mind that joy is opposed. It is true that if we abandoned all the rules we would have no games. It is also true that when we enforce them all we have something worse: we have games that fragment and destroy. Tell your friend to roll again. Throw a useful card to your nephew. Games don’t happen in a vacuum. Those dice aren’t as random as we’d like them to be, and neither are our emotions, so keep first things first as you take down the Death Star. 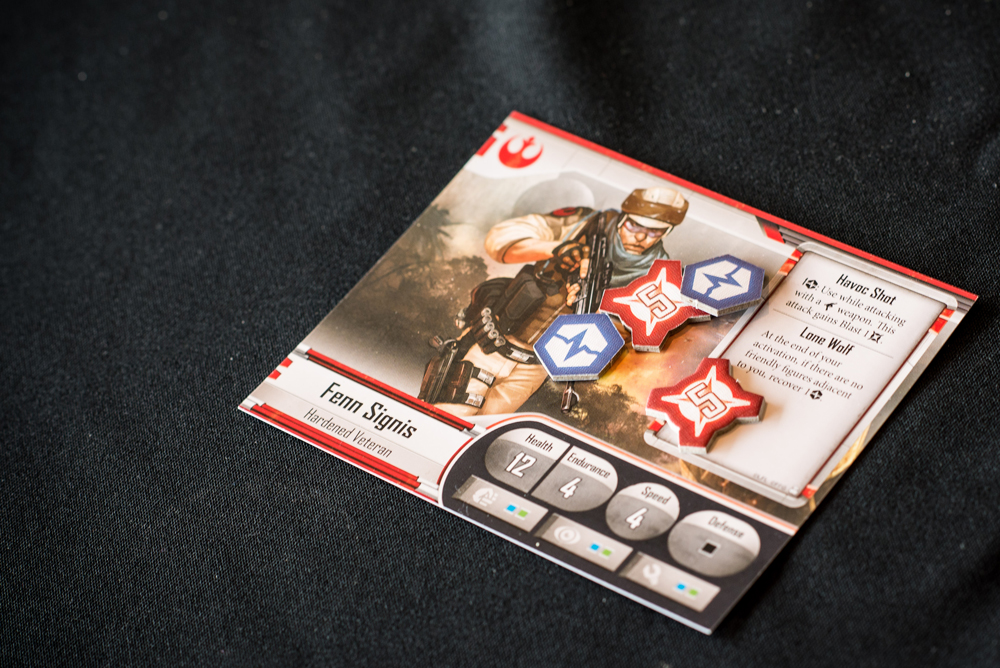 Not All Helping Helps up How Yogurt Says "I Love You"