You Can't Spell Ramen Without Umami

I know what you’re thinking. Well, actually, there are two things you might be thinking. Some of you are grinning to yourselves thinking that we’re making some satirical joke about Styrofoam and freeze-dried vegetables. College gourmet. The rest of you are nodding with anticipation, already knowing that we share a passion for a nuanced dish that has been rising in popularity across the country.

To be fair, I’ve run through the same cycle as everyone else who is just discovering what a bowl of noodles has to offer. When I was younger I loved the prepackaged, flavor-packet-enhanced, sodium-packed, space food that has the same nutritional value as salty cardboard. Warm, slightly meat-flavored, noodley goodness.

Okay, so there is some credit to those eye rolls. 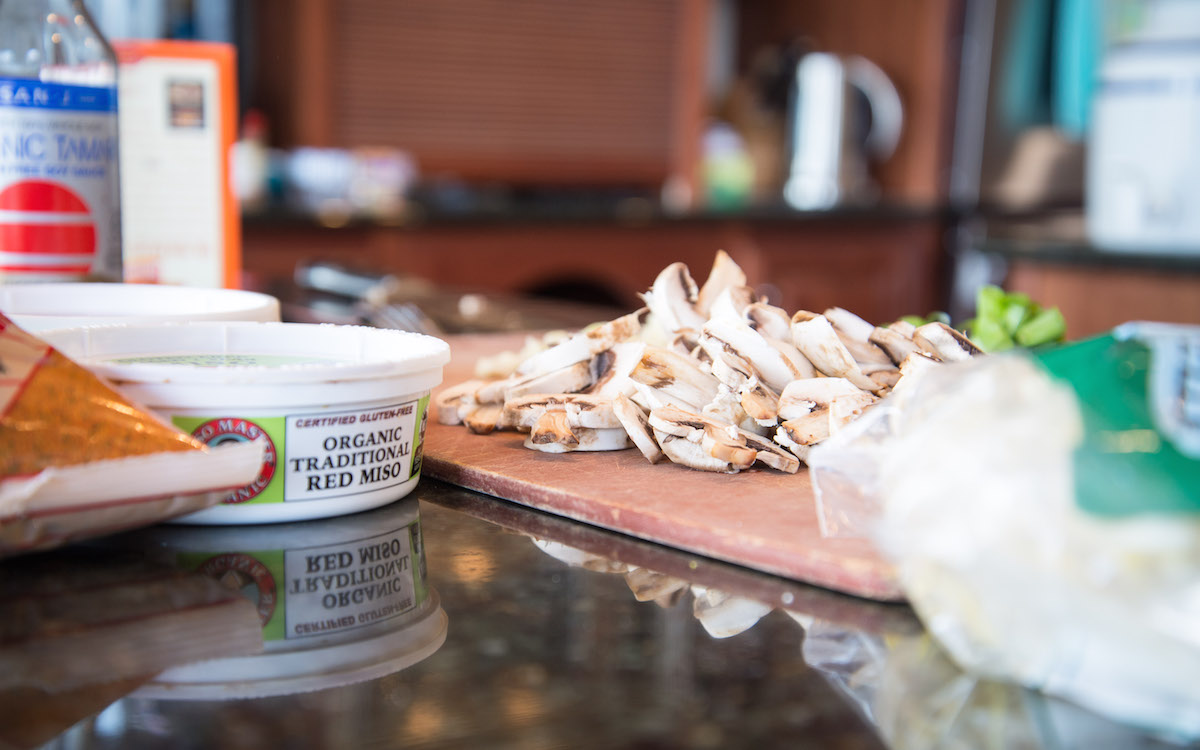 That all changed on my first trip to Hawaii when I was eleven years old. A local friend took our family to a spot no tourists were likely to try, an unimpressive building from the outside but packed with fishermen, surfers, families, and all sorts of locals, all patiently waiting for a stool to get at the restaurant’s singular dish: Saimin, the Hawaiian cousin of Ramen.

Fresh noodles, homemade broth, and a slew of unidentifiable but delicious toppings changed my world forever.

It wasn’t until years later, while cooped up inside for weeks on end during the Minnesotan winter, that I began to build my own recipe. As a vegetarian I was hard-pressed to find a spot in town that could serve up something without meat while still retaining flavor (a common problem vegetarians face, as it seems that most omnivorous chefs haven’t bothered with creating meat-free food that has flavor and isn’t a salad). 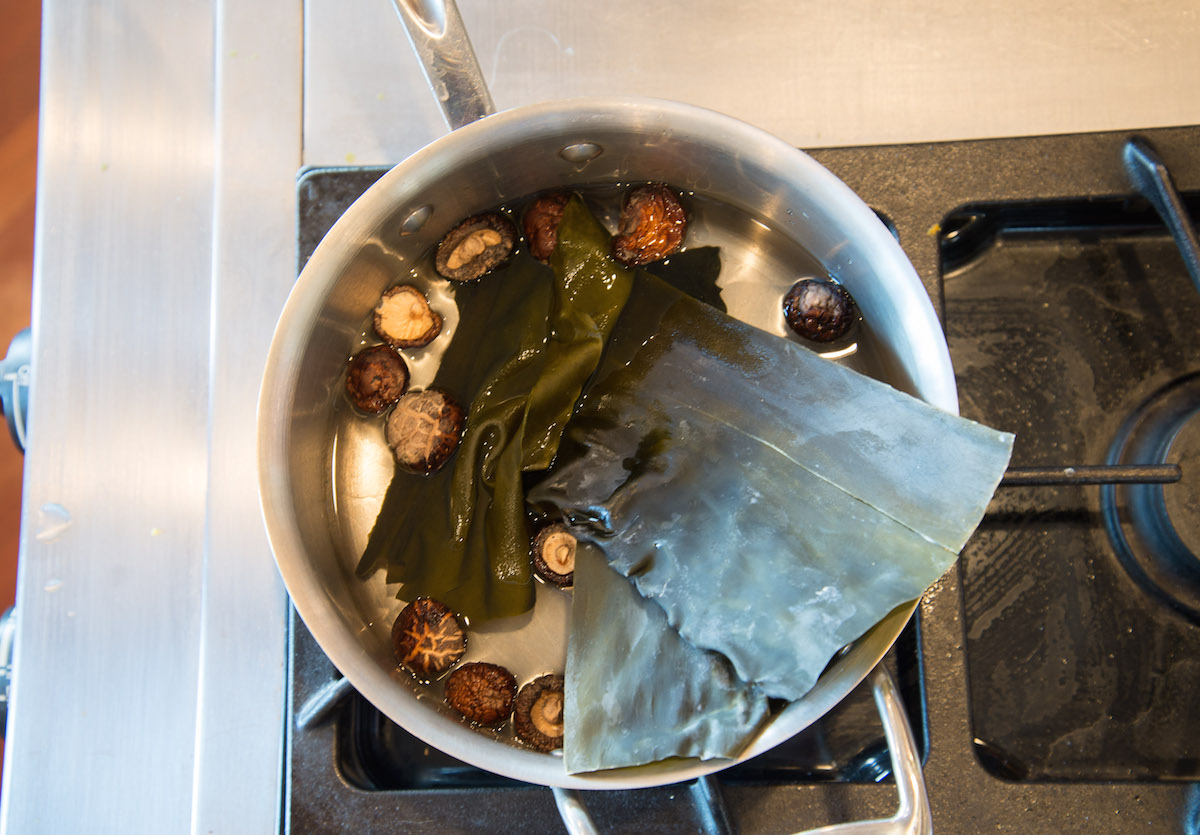 While trying to understand why meat-based soups had such an abundance of flavor that the vegetable-based didn’t I found my way to Umami. For those that don’t know, Umami is the scientifically acknowledged fifth taste that humans possess.

Remember sweet, sour, salty, and bitter? Well it turns out that we can detect one more, and initially it will sound a little vague. Umami literally translates to “delicious taste” and is better described as the pleasant savory feeling your whole mouth and body get when eating something rich in Umami flavor. Deliciousness, some have called it. More than savory, more than salty, it’s the rounded sensation on your tongue that has you sucking the roof of your mouth.

This all feels a bit like trying to describe a star you can only see out of the corner of your eye. 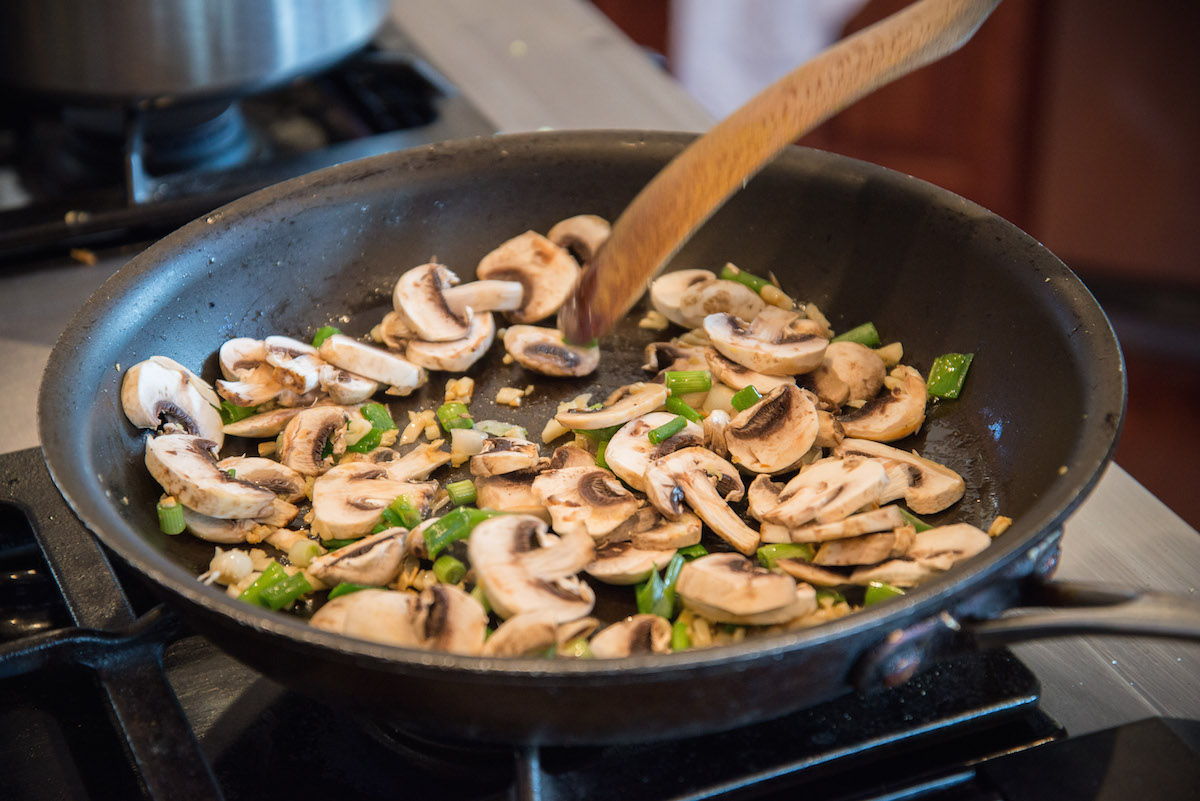 In case you’re curious, glutamate is the responsible acid that acts as the neurotransmitter which gives this taste such power. This flavor is most prominently found in meat and is easily lost when cooking the form found in vegetables. This is where all you carnivores who felt that the answer to my question was obvious, and to be clear I do eat meat (mostly game), but in creating my ramen I didn’t have an abundance of elk bones around to make a tonkatsu.

I’m getting ahead of myself.

There are a few ways of getting at this flavor through vegetables, most notably in a variety of edible seaweed called kombu, which when combined with dried shiitake mushrooms amplifies the Umami flavor exponentially. Both are added to clean water which is heated to just before a boil, then lowered to simmer for ten minutes, then removed from heat for another five, then strained from the now-broth that will be the base of the Ramen.

Now that I had a good base I needed to know how to craft a homemade bowl. The rest of my preparation was created through a combination of taking what looked good from online recipes and throwing in my own taste preferences. Perhaps it’s best if I walk you through it. 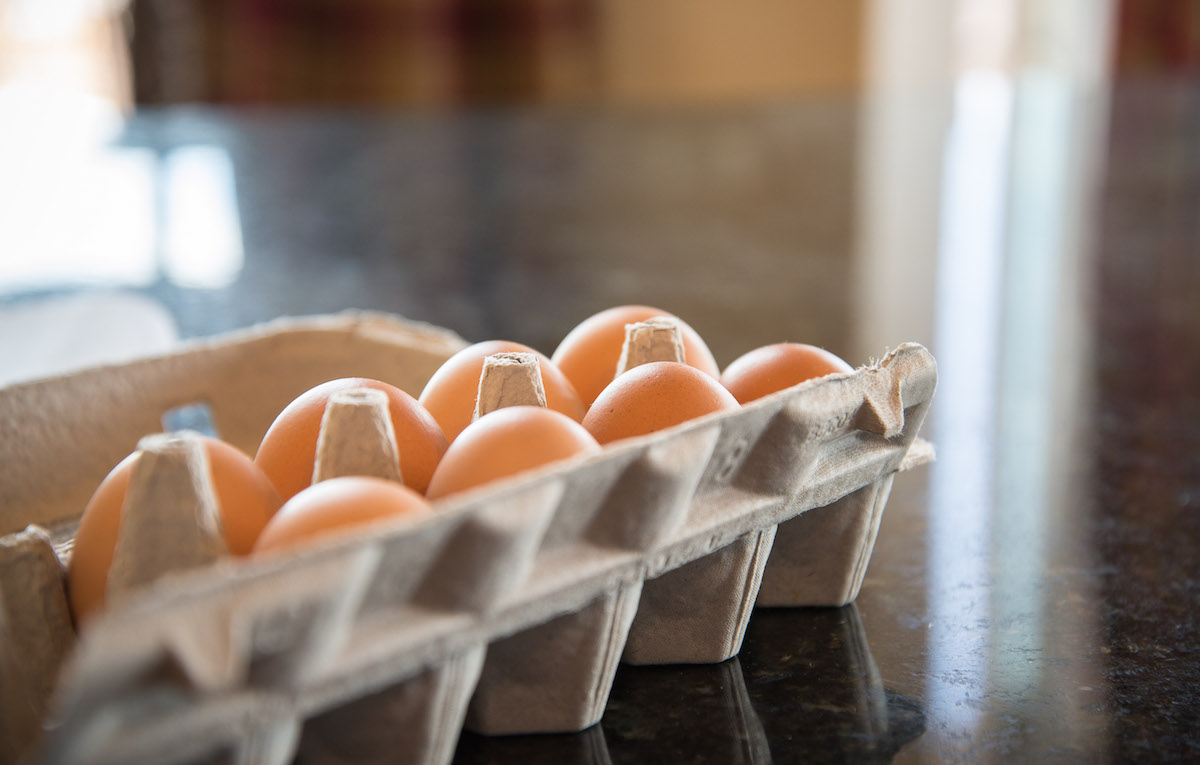 I begin by heating toasted sesame oil. In goes a ton of diced garlic, and I mean a ton—like six to eight good-sized cloves, and some diced ginger, about half as much comparably. Once those have softened up and are near browning, we add the next ingredients. I like some good sautéed mushrooms, so I add about ten sliced cremini mushrooms and some roughly chopped green onions.

The mushrooms soak up the remaining oil pretty quickly, so after about 30 seconds add in 2-3 tablespoons of soy sauce and 2 tablespoons Sriracha and a pinch of togarashi (this is a flavorful blend of spicy peppers, orange peel, and sesame seeds. I could tell you to substitute red pepper flakes but I’d be lying if I said it would be as good).

I should probably tell you now that this is going to be spicy, so if you want to take it back a notch skip the Sriracha. Or try it with everything. It won’t kill you. (Disclaimer: if it does, in fact, kill you, I bear no responsibility. How was I supposed to know you were allergic to spicy food?) 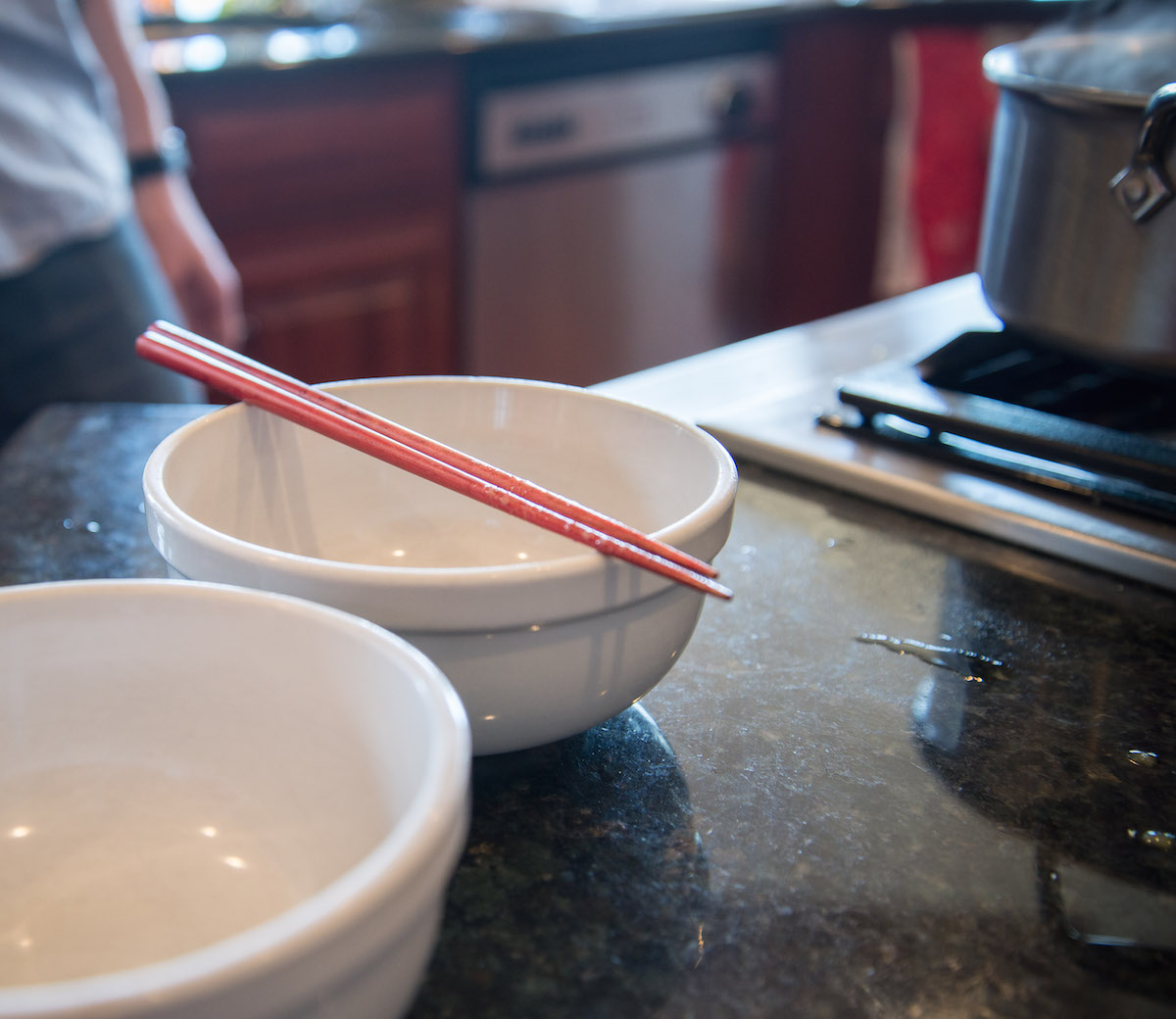 That wonderful soup base I made has been put back on the heat by now, and I’ll take a cup out of it to mix in some miso paste. By using 1.5 tablespoons white miso and 1.5 tablespoons red miso I’ve found the flavor is significantly better, so mix those up in the little bowl until dissolved and then add back into the broth, whisking any bits into oblivion. Crank the heat up on this now. Once it’s boiling, in goes one scrambled egg to give additional oomph to the end product.

The mushroom concoction should be well sautéed now, with a decent amount of flavorful sauce in the pan. I’m combining two parts of the traditional Ramen bowl by adding all of this into the broth base. For those interested this would be my version of the tare. 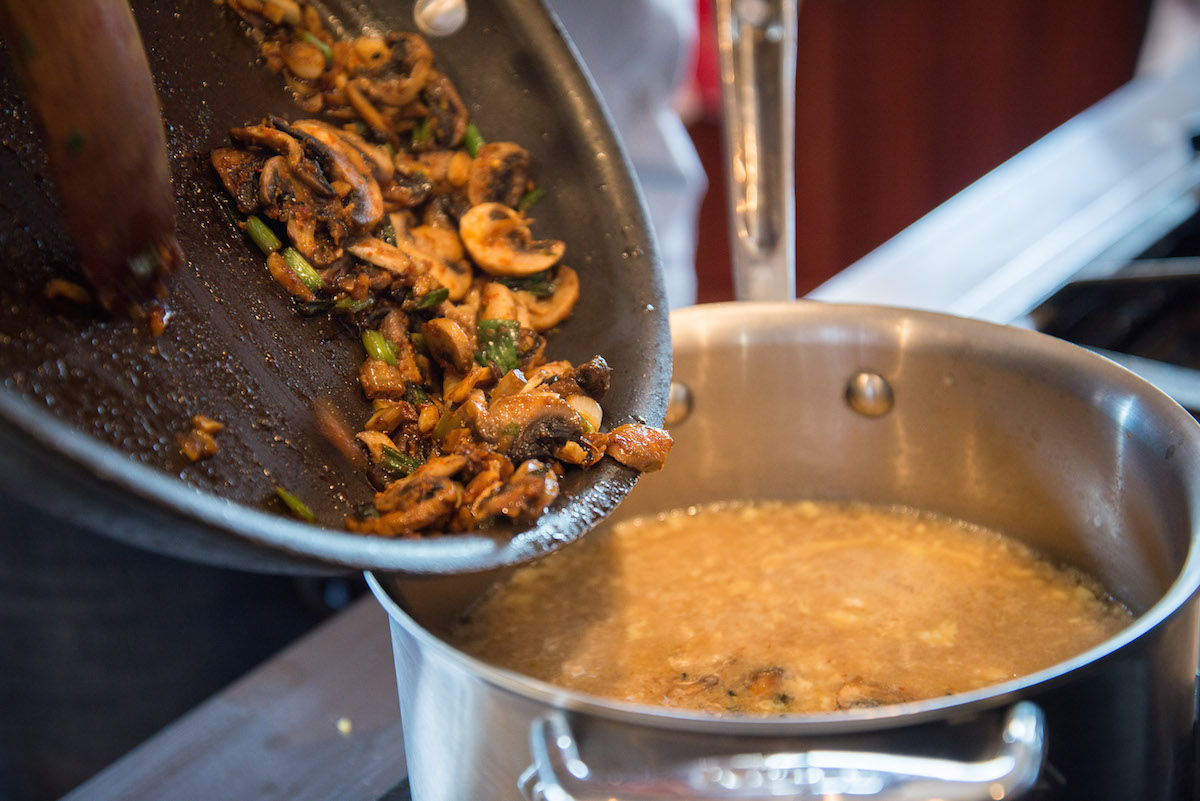 Noodles are another piece of the puzzle that is constantly evolving. Ideally I’d go 100% awesome and make my own from scratch. Eventually. For now I’ve found that the local Asian markets typically have some decent fresh noodles in the refrigerated aisles.

Sometimes the good-looking ones have flavor packets with them, toss those bad boys and keep the noodles. Unlike the Italian-American variety, many noodles intended for Ramen require as little as 30 seconds in boiling water. Each is different depending on the makeup, so read the package (embarrassing and obvious advice now out of the way…). 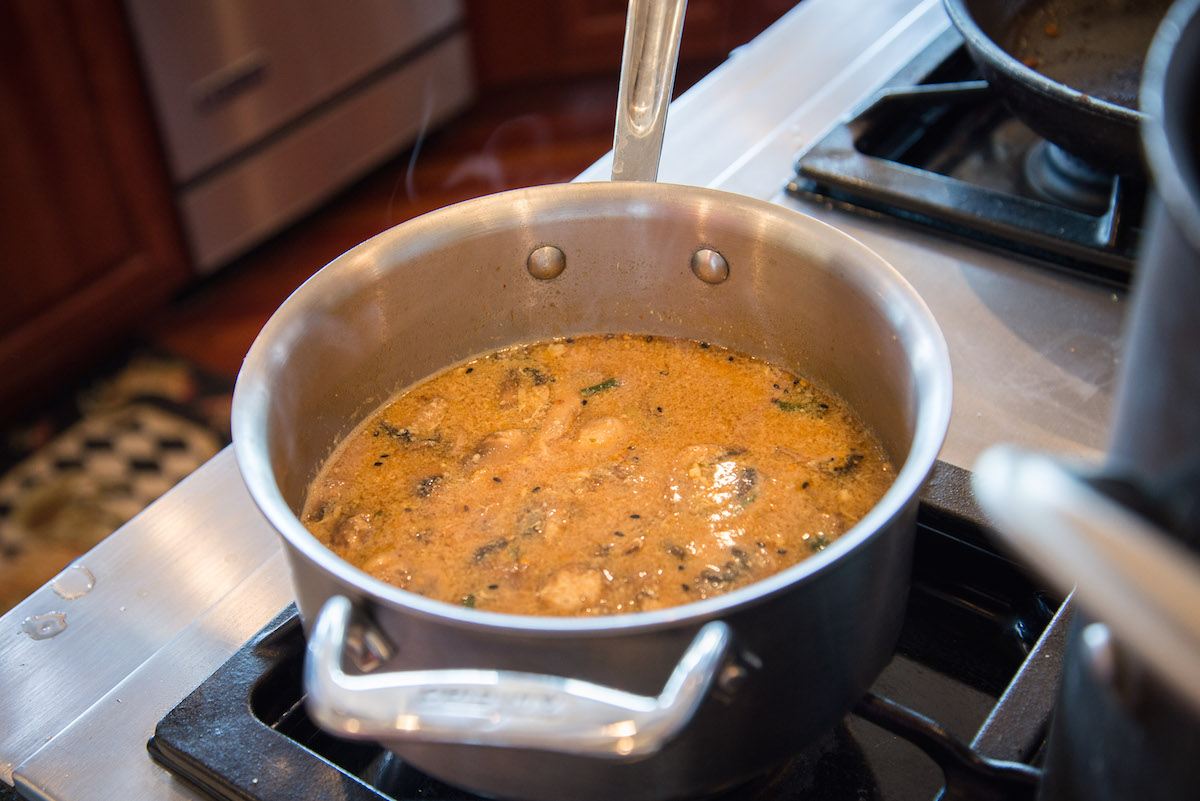 Ramen is meant to be plated and eaten immediately, so prepping your toppings is a fun thing to forget and scramble to do while your noodles boil and you combine your sautéed mushrooms, onions, and garlic into the broth with the egg (make sure all the sauce gets in there). I’ve done the gambit with soft-boiled eggs marinating overnight in brown sugar and soy sauce, but most of the time I use some uncooked green onions, Mung bean sprouts, and a drizzle of togarashi for a simple toppings list.

Noodles go in the bowl first, then the broth, then the toppings. Serve immediately. Have your mind blown as to what Ramen is, was, and forever will be. Savor the Umami that’s rocking your tastebuds and realize with a shock just how flavorful this vegetarian Ramen really is. 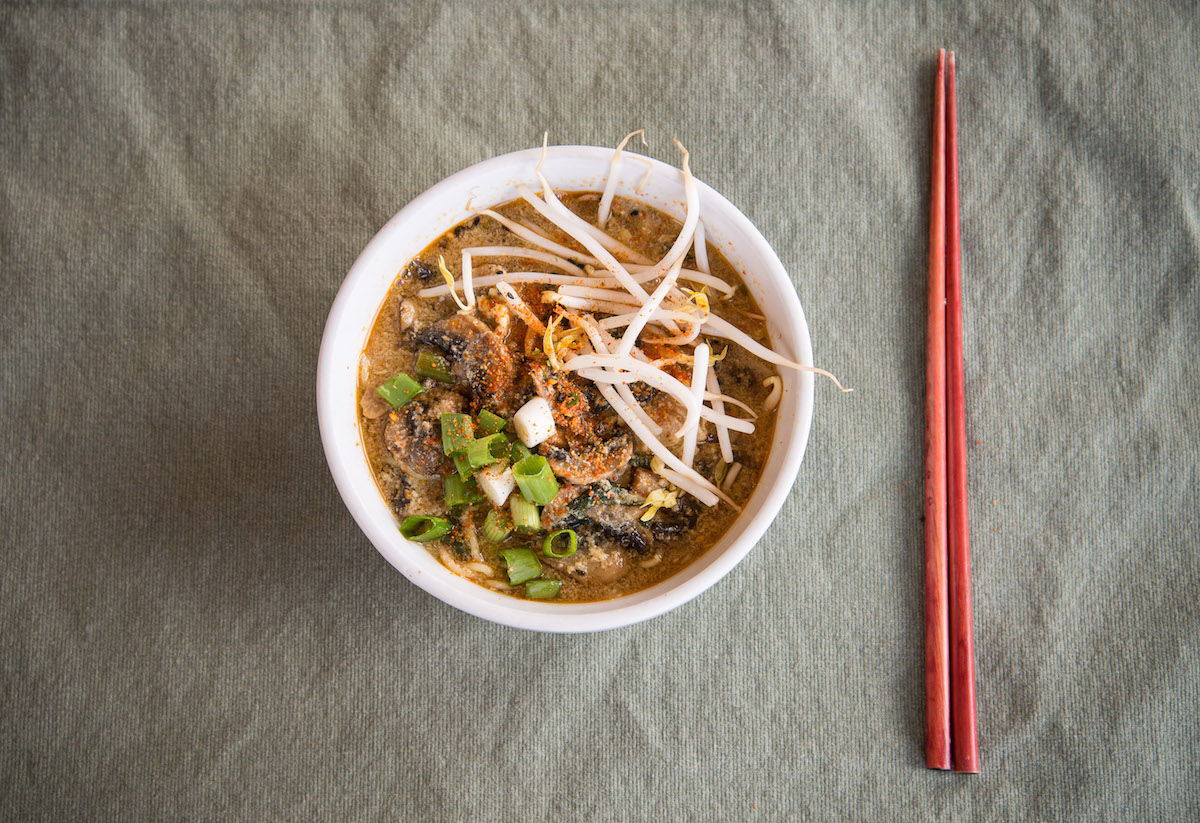 Generosity up It's Not What You Think It Is