Silence of a Snowy Wood

In the winter of my senior year of high school, I woke up to two epiphanies in the middle of February.

The first was that I was invincible, probably. The second was that I had not seen a mountain range unmarred by the skeletal frames of ski lifts for four months. The addition seemed simple enough. By the end of the week I had leveraged the backpacking and snowshoe gear in the house, sweet-talked two friends into going along (No, Jon, that’s fifteen below with wind-chill, and we’ll be out of the wind the whole time), and found a promising route up into the Three Apostles.

Because Jesus is merciful as well as wild, the three of us surrendered to a tug-at-the-gut in the last town before the wilderness and picked up a snow shovel. The weathered attendee gave us a once-over, his eyebrows expressing great doubt. “You got e’rything else you need? Like, water?”

We nodded, a consequence of epiphany 1, and drove out into the woods.

It wasn’t a bad morning, comparatively. The cloud ceiling was high. You could cut glass on those mountain profiles. We did pretty well the first four miles of county road, and then hit a drift and buried the truck on the side of a double-track. Still, brief investigation revealed that the car was not stuck badly. If the alpine permafrost rose a few inches higher, we’d be able to drive out on the bridged layers, a kind of “parting of the water’s” that, we were sure, happened early every morning. We locked the truck. We struck out. Three bends of road, and the wilderness was ours.

There wasn’t another soul in the entire alpine valley. We hit a small rise in the first mile and found ourselves facing mile after mile of snow-capped alpine firs. Even the first slopes of the mountains were miles away. It didn’t look so different from white-caps on a horizonless ocean, and—come on—men have been pulled out to sea for generations with far less promising prospects. We snowshoed into the woods, trading the lead every thousand steps.

For those who have never snowshoed, I have prepared the following experiment. (It can be done over breakfast.) Begin with a bowl of runny oatmeal, and a spoon. Better yet, a spatula. Slap the blunt spoon down into the oatmeal, allowing it to sink for an instant so that the oats cave in over the surface of the spoon. Then, just as the spoon settles, realize you need to take another step, wrest the spoon up, out, and forward. The motion experienced is not so different than hiking through crusty snow. The very same principles that make spoons good tools for eating oats make snowshoes exhausting tools for hiking.

Still, though, the alpine woods were stunning. With the cloud ceiling coming down, it warmed a little. It was almost perfectly still. The broad, clean taste of the frozen air made it a pleasure to breath hard. It began to snow, and the wide flakes turned the woods into a fairy tale. For several miles, the hiking was idyllic. Down off the double-track, a creek could be seen among the trees—the impossible jumbles of the river stones covered with snow looked like something from a Dr. Seuss story. 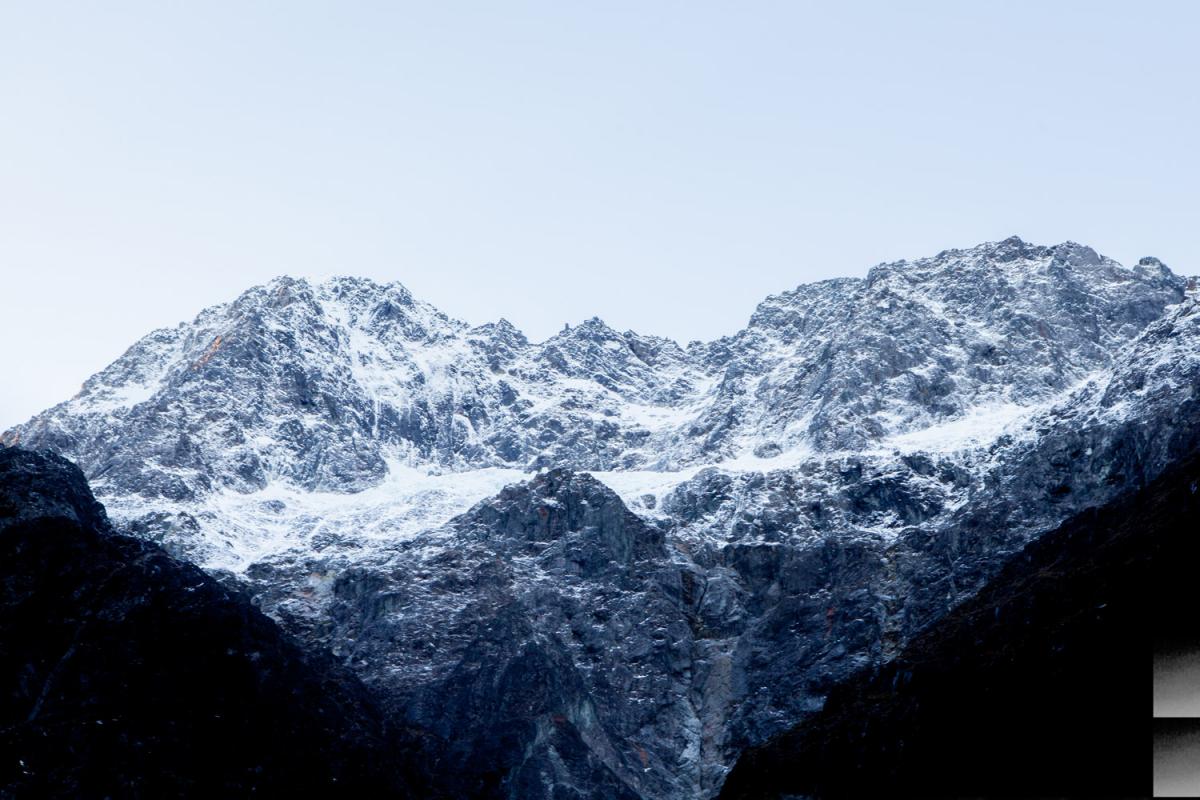 We weren’t a bad view ourselves, backpacks and show shovels and ice axes looking wild and dangerous and formidable. On toward evening, though, and the snow grew heavier. Then it turned the stroll into the race for the south pole (think Shackleton). It was white, a state increasing its totality until the only indication of the track was the black walls of the alpine fir.

Half an hour later, those vanished. We’d read enough Little House on the Prairie to know that we should tie ourselves together with para-chord or something. Maybe devise a system of communicative whistles. It was what they call a “White Out.” For two hours, we felt our way forward along the logging road in a zigzag.

It was the wind, though, that let us know our elevation had changed. The texture of the snow shifted. It was no longer soft and heavy over soft and heavy. It became meringue, ice over powder. The snow shifted its angle like a sun going down until it hit us horizontally, and we buried our faces in our jackets.

The sound came back, too. We could hear the wind, which meant we weren’t in the trees anymore. It was Jon who voiced the communal exhaustion, risking his face into the space of our huddle. “I’m not sure how much I have left today. Can you guys feel your feet?”

We couldn’t. Being democratic, we included our feet in the vote. A stop it was. Just off the trail (we’d left the road, we found later, hours ago), there was a dense knot of alders. They may as well have been a Best Western with the coffee on, the way they caught the wind. We christened our snow shovel, made a pit for the tent, and hid inside. 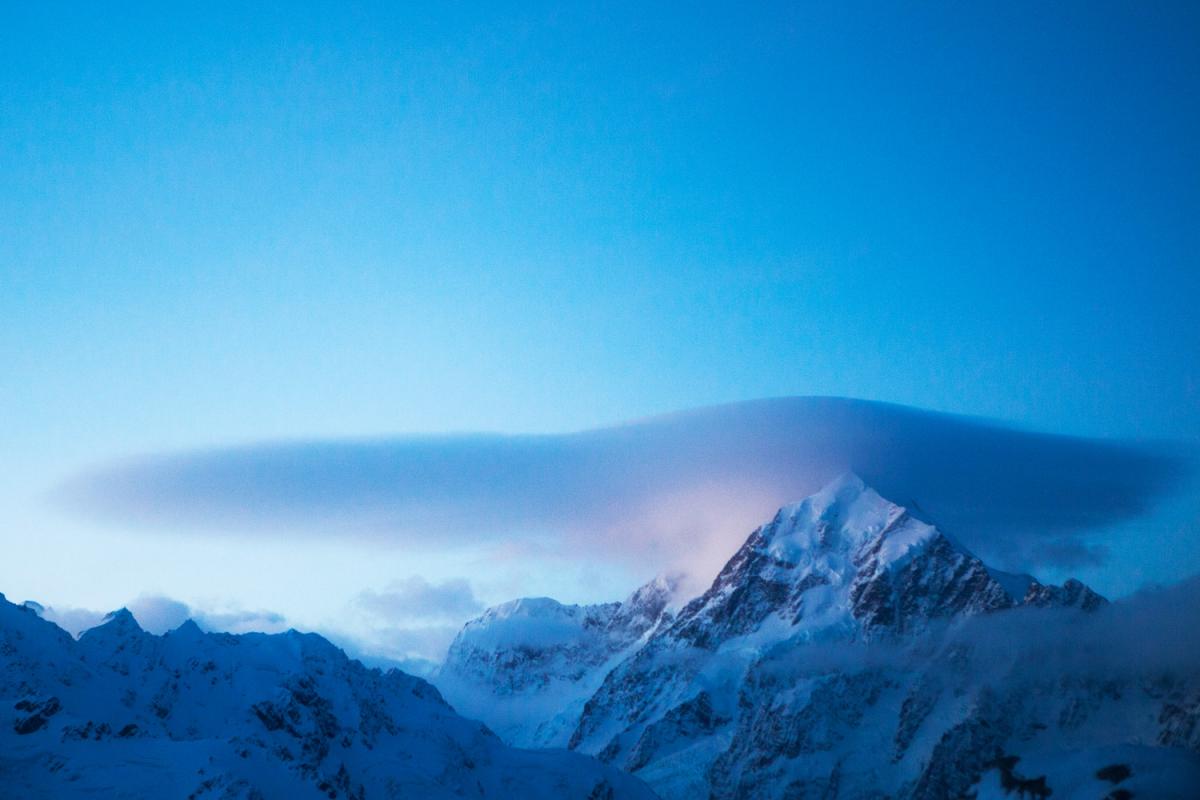 The clouds were gone. We were in an alpine valley. My hat seemed to mark tree line with some accuracy. I walked down toward the creek. It was not only silent—it was a hollow. The sound was a vacancy, like a gap-tooth. It seemed like the way color makes noise, all stark, straight lines.

The beauty of the silence in a winter wood is a beauty so distilled it becomes something else, like barley turned into single malt, or Mark Evans’s leather art coming to life in its raw unity. It was so quiet it seemed like an exaggeration. I mean, holy smokes—it was perfect. The silence called attention to spaces, to the gaps in the woods, to the huge cradle of the alpine rift. Three high school punks had wandered up into an anchorage. It was a kind of stillness you learn to crave.

Someone told me that winter is like a held breath, but that didn’t seem true at all. Wildness was not holding its breath. It was a presence, definitely. It was just stark. Silence like a resting heart rate is silence, or constellations are silent. It felt like noise was a gesture of humility, maybe—wind, birdcalls—and that humility had lifted like a curtain and the mountains were showing the edges of their enormity.

Still, it didn’t need to be alpine. A lap through the park, or even around the block, in the middle of a snow will swallow sound in the same way. I’ve definitely made a practice of going out to it. If it’s snowing, the very soundlessness of the woods becomes a space for the heart to open up.

I cracked my ceramic filter, though. It turned out that fifteen below was sort of ambitious, and that iodine beats pump filters in the snow. Lessons, I guess, you learn over time, or from books, if you knew to. We had frozen Jon’s boots overnight, melted off the soles trying to thaw them, and consumed the lion’s share of the provisions.

That, and we knew that down in town there was a place called Quincy’s that did prime rib for a ten spot, and we could feel its magnetic allure from miles away. We hiked out the same day under clear skies, tried to ignore the crust thawing beneath our feet, and hit the car with the sun going down and wet snow snug against wheel wells.

We did get out, though, in one of the most miraculous experiences I’ve run into, driving over the top of the snow like Peter in a moment of trust. The car cleared the snow, and the three of us rolled toward town at a crawl, windows down to feel the woods swallowing the engine noise to silence.

Alpenstock up Remember the Dragon