Kris Kringle - the And Sons Interview

While on an epic caribou hunt this fall, north of the arctic circle, we followed a curious tip from an old Inuit guide and stumbled upon the North Pole Workshop. There we found The Man himself—Father Christmas—just as warm and inviting as you’d expect, and surprisingly candid. So here it is folks: an And Sons exclusive!

And Sons: Mr. Claus… St. Nick… may we call you Nicolas?

Santa Claus: [Wiping some crumbs off his red coat] That’d be just fine.

AS: Guess this is a pretty busy season of the year for you. Thanks so much for making time for us.

SC: Mmmm… not as busy as you’d expect. Business is down, boys. You've seen the news—a whole lot more folks filling up that Naughty column than there are Nice. Gonna be a light load this year.

AS: Yeah—we noticed that. Forgive us if we seem a little flustered. This is a bit of a childhood dream come true.

AS: There are so many questions we've been dying to ask. Let’s start with something simple: what's your favorite Christmas carol?

SC: I’ve always loved I wonder as I wander. [At this point Santa begins to hum it a little to himself; we wait to interrupt.]

AS: That makes sense. You do do a bit of wandering, don’t you? Which raises the question—how does it happen? How do you cover the whole world in one night? 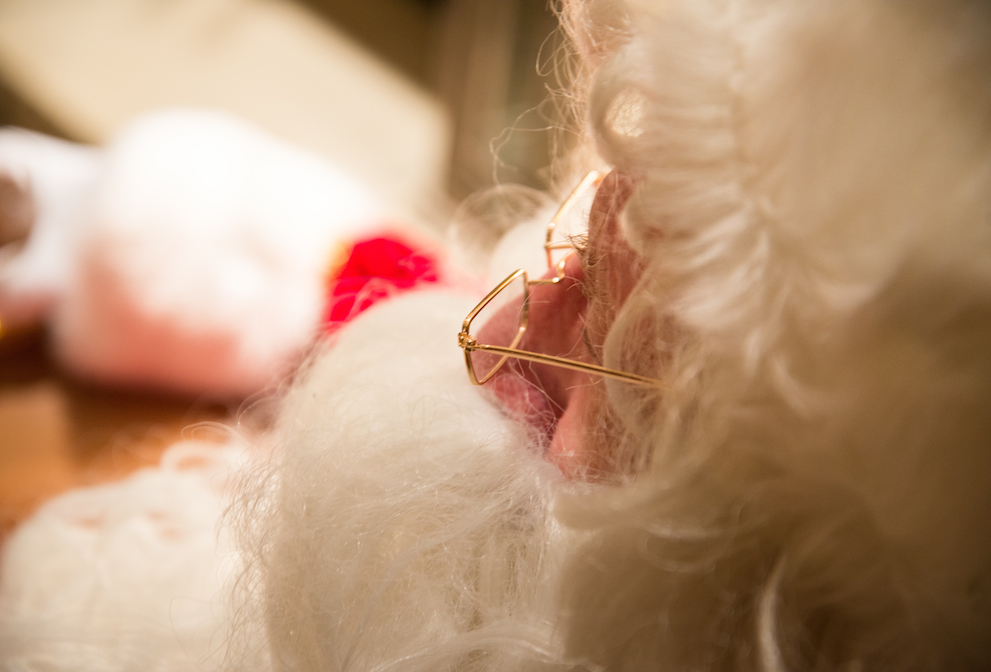 SC: Anomalies in the space-time continuum. [Looking down at us over his bifocals] Did you boys skip science class?

SC: Well, now, that makes sense, doesn’t it? Think FedEx-meets-Star Trek. That should help you grasp it.

SC: [Laughing] Oh, ho ho—I’ve seen it all. The Millennium Falcon. Spiderman’s powers. Kids don’t ask for their two front teeth by the way—they’re much more ambitious. One eight year-old boy asked me for the Nimitz-class supercarrier Theodore Roosevelt, fully operational and battle ready. [Chuckling] I thought that was weird.

SC: [Raises his eyebrows as he looks at us with those twinkling eyes] I see you when you’re sleeping, if you recall.

AS: We would have put it to good use.

AS: That’s okay. Listen, we want to respect your time. Can we go ahead and ask the Big Question—are you for Real, or not?

[There follows a long, awkward silence at this point as St. Nick tamps out his pipe, slowly fills and re-lights it. In the heavy silence we can hear the grandfather clock ticking; the sound of the wind outside; and far-off factory-like noises. We wait for Nicolas to answer.]

SC: I am the Jungian expression of humanity’s subconscious desire for God.

SC: I see you waking and sleeping. I know if you’ve been bad or good. They call that omniscience, son. A god-like attribute. Only in me, you see it softened with a longing for benevolence and playfulness. I’m an archetypal yearning for God, trimmed down to manageable size. [Looking down at his belly, which in fact does shake rather like a bowlful of jelly] But not that trimmed down—oh, ho ho! 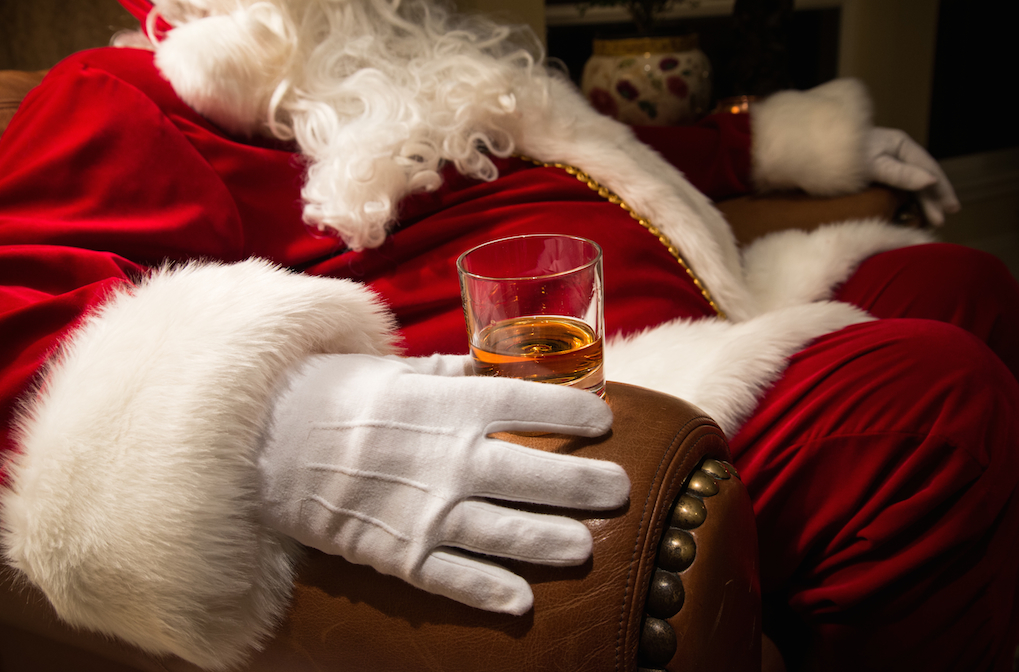 AS: Right. Okay then—where do you stand on the Other Star of Christmas?

SC: I take it you are referring to The Competition. Born in Bethlehem? Gentlemen, without him, I'm out of work.

AS: Really? We kinda thought you guys were on different pages. You know—at odds with one another.?

SC: Lads, without him Christmas would never have existed. He got this whole thing started. I'm a Johnny-come-lately. I'm riding his coat tails.

AS: You know each other?

SC: It was my big break—the best night of my life.

SC: You haven't figured it out? Mysterious traveler, comes late at night from far away. The strange clothes. Bringing gifts. The sudden departure?

AS: Wait—you were one of the Wise Men?!

AS: People aren't going to believe this.

SC: [Again the raised eyebrows] You’re printing an interview with Santa Claus—who’s asking for a suspension of disbelief here?

AS: Right. Okay, then. What does the future hold? Have you thought about a career change?

SC: Things keep going the way they are, I might have to. Maybe eco tourism—penguins, polar bears. Folks pay a lot of money to see that stuff. [At this point he tamps out his pipe and begins to rise] Well, boys, I’ve got work to do. Finalize up The List, check it twice…

AS: Wait—before you lay a finger aside your nose, give a nod and all that, can we ask one more question?

AS: How's it looking for our list this year?

SC: [Another long sigh] There’s a lot of that going around. I'm afraid the Highland Park 30 is out of stock.

SC: You haven’t been that good.

AS: Dang. Any chance on the Cabelas Real Tree camo seat liners for the F250?

[As St. Nick wanders down the hall, we hear him picking up a tune] Fast away the old year passes, fa la la la la… 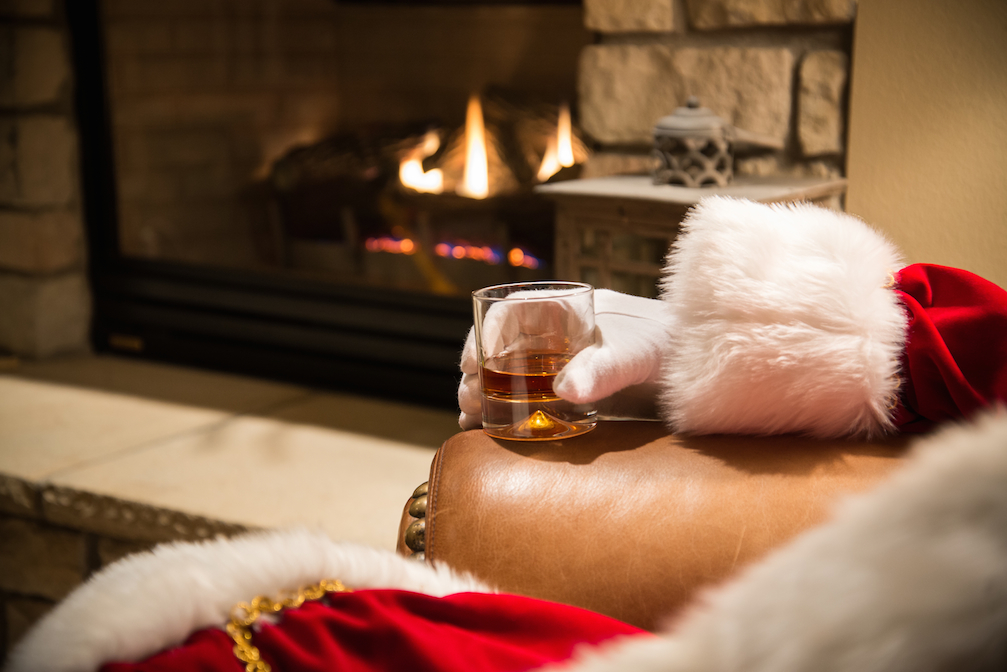 Remember the Dragon up Scrooge's Epiphany