It’s hard to say what brought the greatest joy.

“Never,” our guide responded. “This country is so remote we drink straight from the river.”

Morgan had nicknamed him Muskrat. He was a trapper for a living and wore a fur hat he’d made from muskrats. The river in question was the Jennings, on the border of British Columbia and the Yukon Territory. We were there to fulfill a lifelong dream. And it was the deepest I had ever been into the wilderness.

“Most of the animals in this valley have never seen a human being,” he went on. 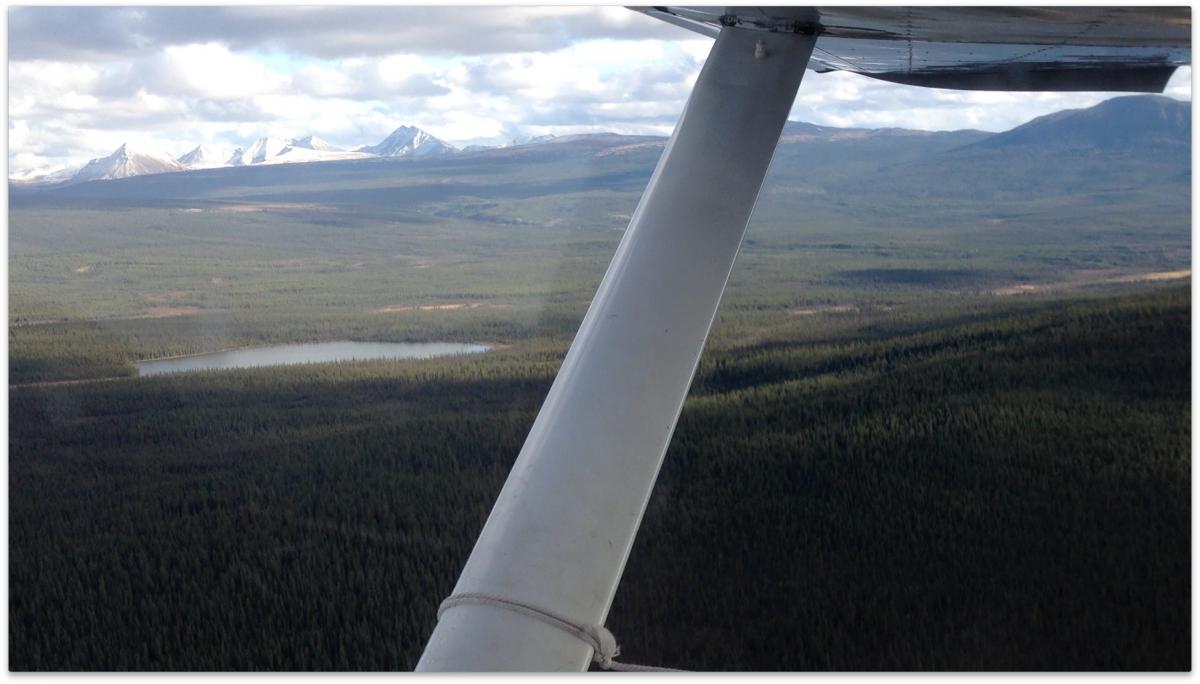 I was stunned—such places still exist? More joy. That fact alone was worth the effort to get here. And it was an ordeal to get here.

First came the commercial flight to White Horse in the Yukon, then a three-hour drive down the Alaskan highway into nowhere, followed by a floatplane trip into the backcountry (our pilot was seventy if he was a day, and I was certain it would be our last flight anywhere). Then followed a six-hour journey by argo through swamp and forest (an argo is a six-wheel amphibious vehicle that can basically go anywhere you have the nerve to go).

Back to the wildlife—I saw a wolf chasing a moose from the floatplane. It was a lone black wolf and it seemed perfectly confidant about taking down a young Yukon bull. That’s a staggering thought—Yukon moose stand 8’ at the shoulder. That’s higher than the doorframe in your house. When I later saw the wolf prints in the mud I was speechless; they were the size of a tea saucer. Everything out here is massive, I thought. The country. The rivers. The grizzlies. And that too brought me joy.

“It has to do with body mass,” Muskrat explained. “Father north you go, animals have to be bigger to survive the winter.”

The first moose encounter we had was enough to remove any thought that he was grandstanding, exaggerating to test our nerve. And we were there to hunt them with the bow.

Most of our friends back home thought we were nuts. Maybe we were. The first evening out, when we came upon a 20’ by 20’ patch of earth that had been torn up recently by a grizzly, I began to have my doubts as well. But it was, as I said, a lifelong dream. 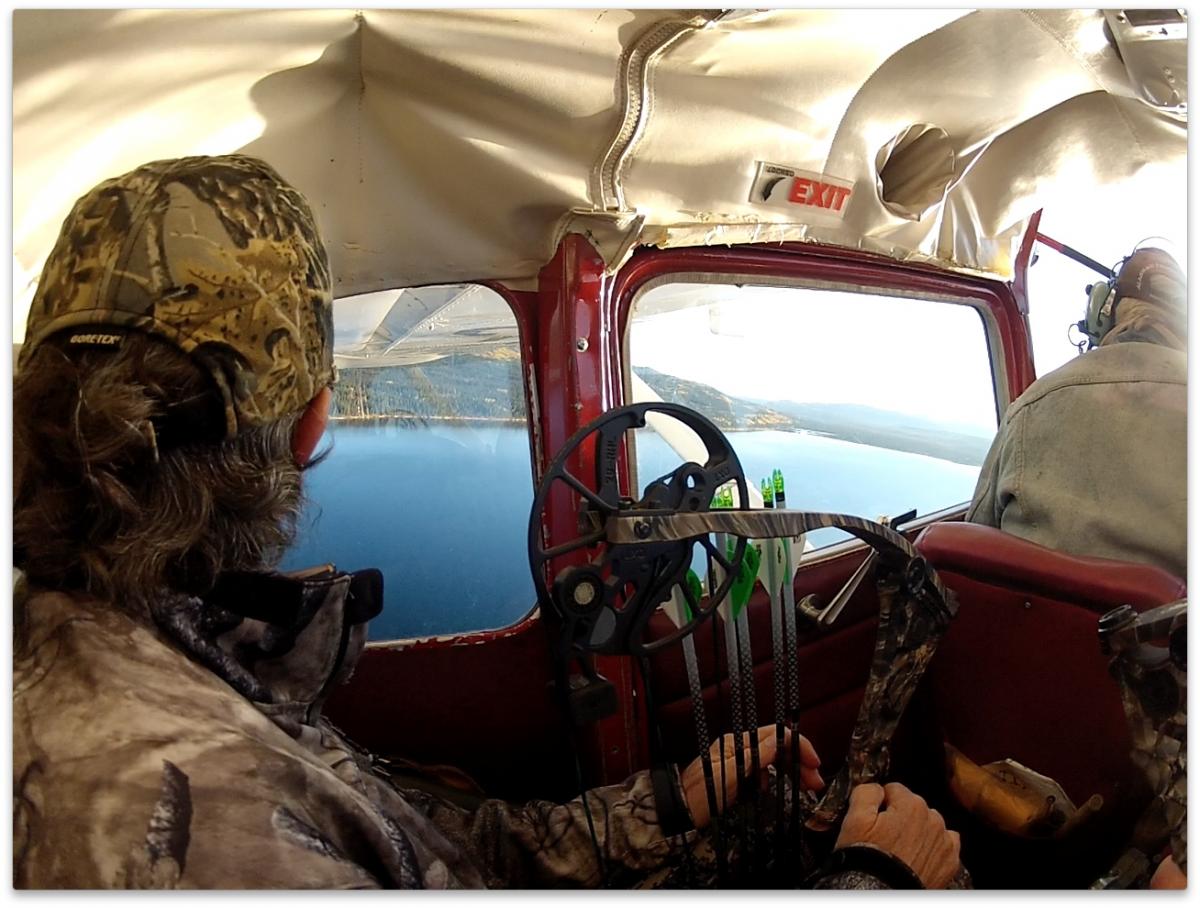 I’m not a big bucket-list guy, but I do have a few dreams tucked away in my heart. Hunting Yukon moose with the bow was one of them. We’ve got a painting of a bull moose in the hallway back home, and over the years as I passed it by I would pray, Someday, Father—someday.

That someday came in the fall of 2012, during the height of the moose rut when you can call the big boys in close—close enough to take them with the bow. Now, I know most folks aren’t hunters and don’t quite get the hunting thing. Spanish philosopher Jose Ortega y Gassett has written beautifully on the topic, so let me share something from him:

"To the sportsman, the death of the game is not what interests him; that is not his purpose. What interests him is everything he had to do to achieve that death—that is, the hunt…Death is essential because without it there is no authentic hunting: the killing of the animal is the natural end of the hunt and the goal of hunting itself, not of the hunter…To sum up, one does not hunt in order to kill; on the contrary, one kills in order to have hunted."

It’s not about just going out and killing. It’s about wilderness and staggering beauty and adventure that will make the hair stand up on the back of your neck. It’s about being tested and procuring your own food and something deep in the masculine soul, a connection with men down through the centuries. Hunting is the oldest adventure man has undertaken.

We lost some of our food on the way in during the argo thrashing (a bit like taking a Conestoga wagon through the virgin forest). So we hunted grouse with our bows to supplement the evening meal. That was a huge “joy bomb.”

Potatoes, onions, and wild grouse cooked in a frying pan over a wood-burning stove is by far one of the best meals I’ve ever had, anywhere. Along with the caribou and stone sheep we ate while waiting and hoping for fresh moose in camp. 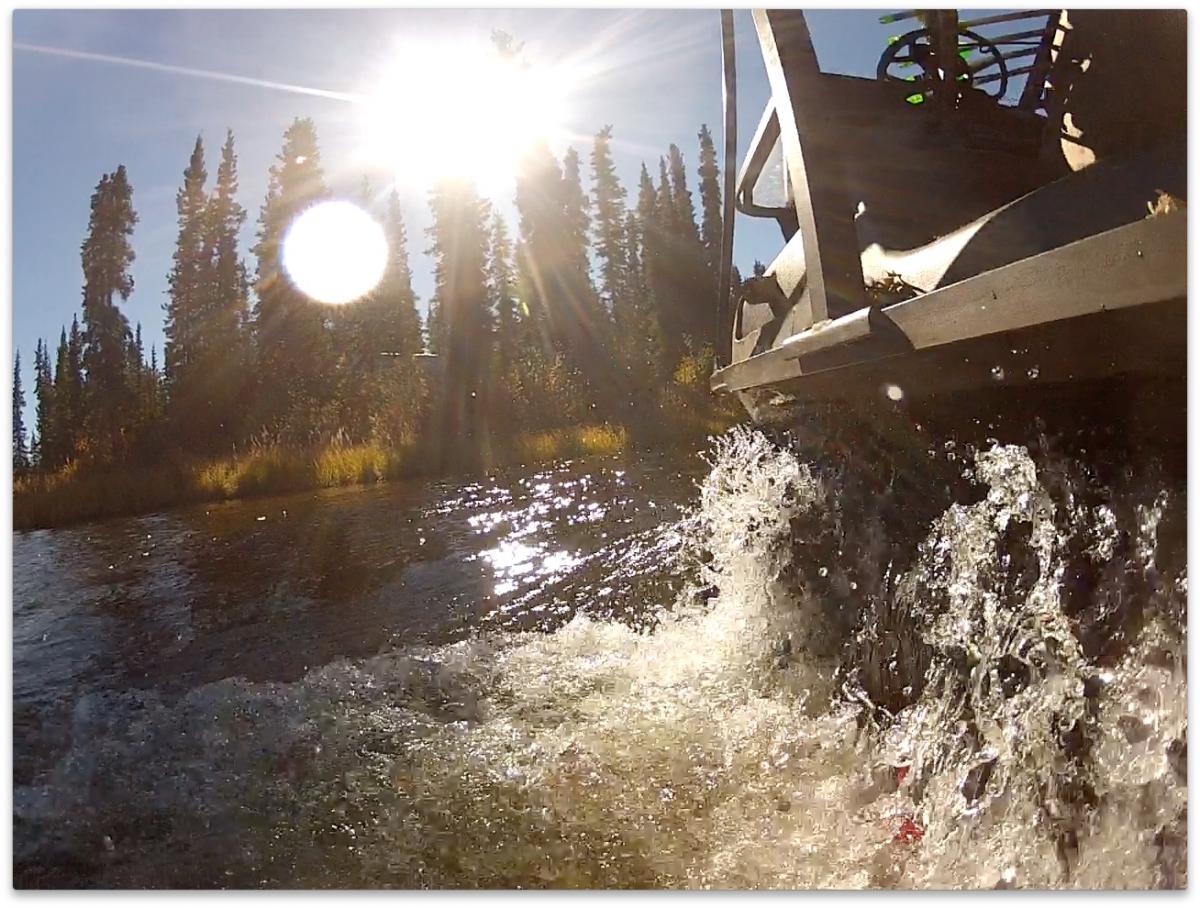 (By the way, you non-hunters, if you eat meat then you kill animals every day. If you use leather anywhere in your home or wardrobe you kill things. It’s just that someone else does your killing for you. Even you vegetarians require the life of other living things to make your meal. This is a huge lesson lost to postmodern man—your life depends on the death of other things. I think it’s why postmodern man doesn’t understand the Gospel.)

We slept in a small plywood shack on the banks of the Jennings and listened to the river sounds and the crackling of the wood stove. Joy washed over us as we drifted to sleep. If you had to take a pee, you took a rifle with you because of the bears. Life this deep in the wilderness takes on a whole new vitality and sharpness.

Heading out in the dark every morning we hiked a few miles down to the willow flats. Muskrat brought his elephant gun (I kid you not) for our protection. Moving silently through the dense forest of bears and wolves was an extreme joy.

We had a number of very close moose encounters. I was at full draw once, on the fourth day just at dark, when we came upon a bull feeding in a creek. But he caught our wind and was gone.

On the morning of the seventh day, we woke to pouring rain. It sounded like the shack would float off downriver. I could feel the clock ticking; this was a ten-day hunt. If one of us downed a moose it would take an entire day to dress it and get it back to camp which left only a day or two for the second guy to get his moose.

I had brought my 30.06 along for this very reason, and as I lay in my down bag listening to the rain I prayed, and I sensed God saying, You need to bring the rifle today. I knew he was right, but I was crestfallen—part of the dream was to do it with a bow. But time was running out.

We made our way down to the willow flats, where we had a tree stand for spotting (down on the ground the willows are 10’ high, and a jungle of trails made by moose and bear). The rain let up. I told Muskrat to glass from the stand. I was going to make my way through that jungle to a section of flat we couldn’t see well but I had a feeling might hold moose.

Soon as I hit the ground I heard him whisper from above, “There’s a bull back there—I see his paddles!”

The time it took for me to quietly, swiftly cover the four-hundred yards through the jungle and around the swamps felt like an eternity. When I finally came around the last corner and saw the massive old bull standing only 90 yards away, I knew why God had told me to bring the rifle—there was a beaver pond between us, blocking any possibility at that distance with the bow. 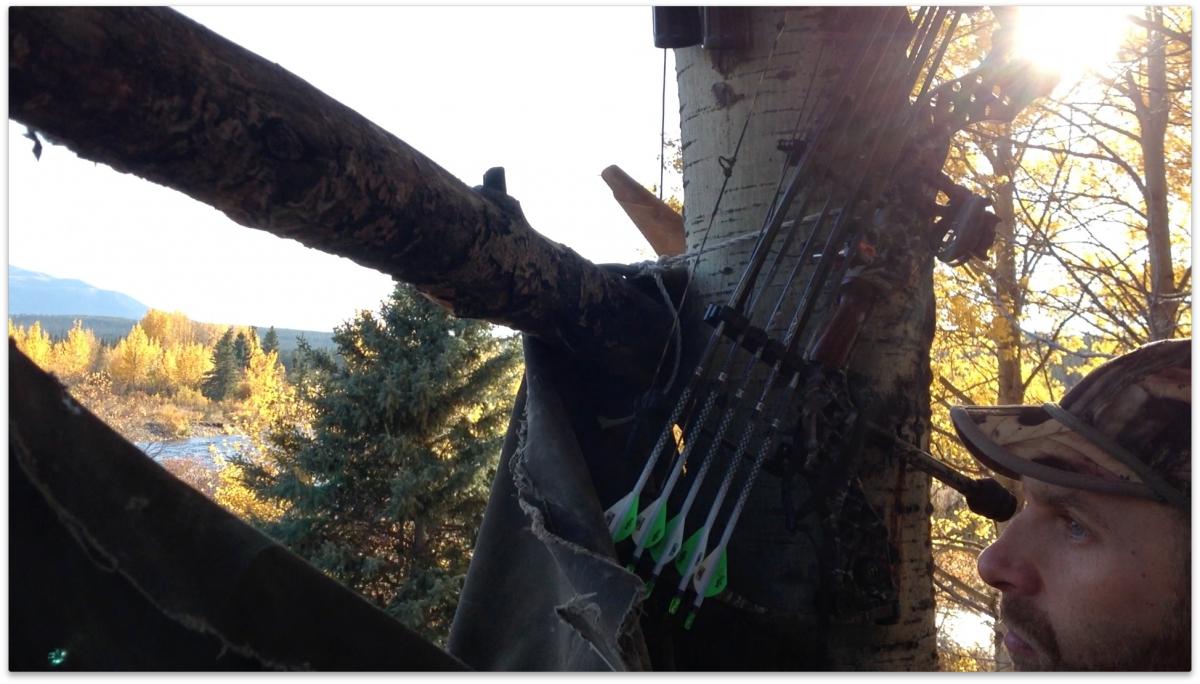 The most startling moment of the trip came a few hours later, as Muskrat, Morgan and I began to deal with the 1,800 pounds of animal before us. Morgs and I were rolling up our sleeves and pulling out our knives when Muskrat looked at Morgan and said, “No.” It was the first time all week he had raised his voice; I thought we had offended him by violating some unknown protocol of the north.

“Now is the time when the grizzlies come. They always come silently and always through the thickest cover. If all three of us have our heads down for the next hour, we’re dead. Your job is to guard us while we deal with this moose.” At that, he handed Morgan the elephant gun.

Legendary big game hunter and elegant writer Robert Ruark has a very good explanation on why the mount hanging on my wall is so justifiable: in a winter or two, the wolves would have taken down that moose and his death would have been terrible. In this way it was swift and merciful, and the mount on my wall gives thirty years of joy and memory and beauty that would have been lost to wolves and rot, never to be seen again.

Back home in suburbia—suburgatory as Morgs calls it—every time I see the moose I’m reminded of wilderness, and beauty, and why I love wild places, and animals, and why I’m committed to protecting them. And it brings new joy. 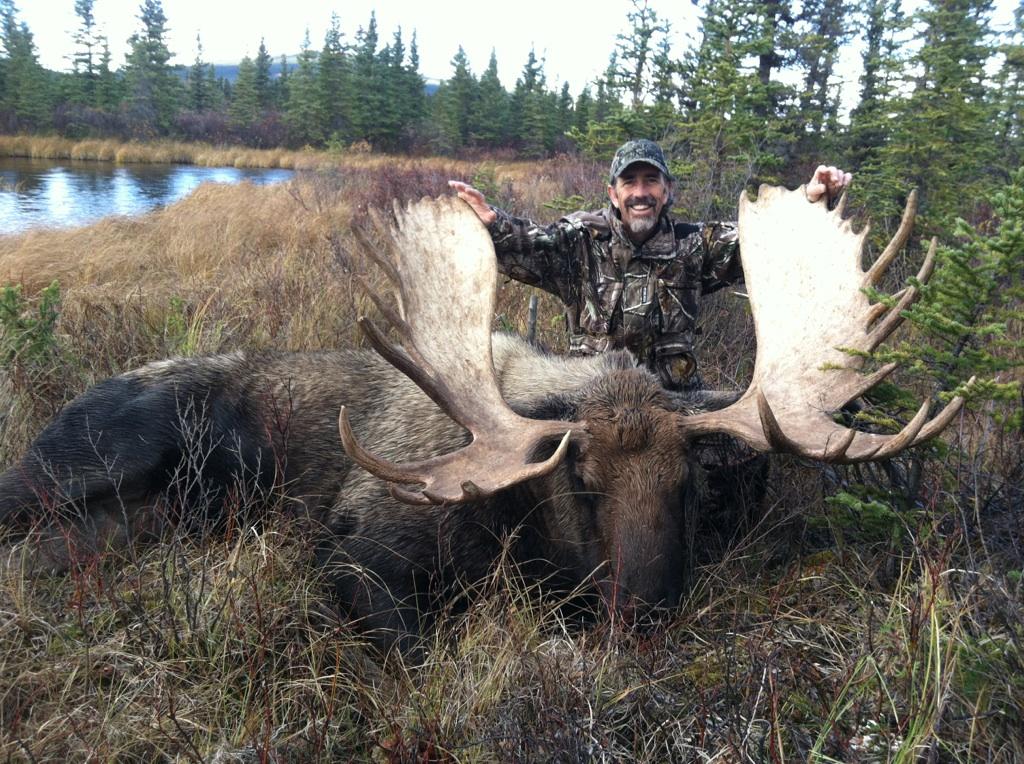 07 up A Student of Poetry